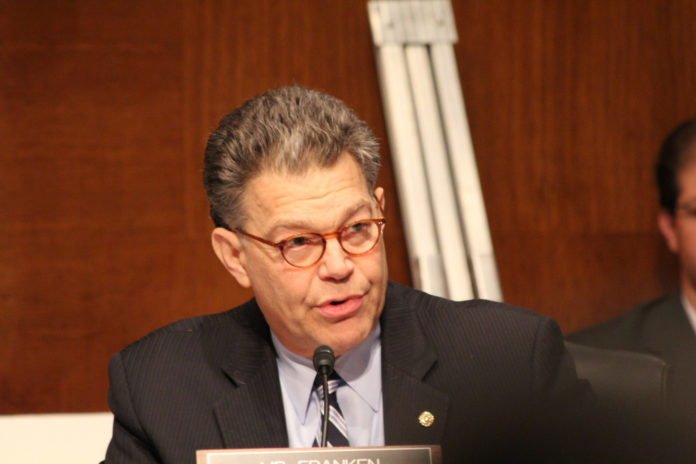 On Thursday, radio host Leeann Tweeden accused Minnesota Senator Al Franken (D) of harassing and groping her during an appearance at a USO event in 2006. Within hours, Franken had issued a lengthy statement of apology and called for an investigation by the Senate Ethics Committee. Tweeden later said she accepted Franken’s apology.

As terrible as the incident with Tweeden was, right-wing radio personality Melanie Morgan decided she’d try to make some headlines for herself by saying she too was the victim of Franken as part of an appearance on the ABC show Politically Incorrect in 2000.

What, did Franken “harass” Morgan?

Nope. Not even close.

Morgan told the “Media Equalizer” website all about her experience with Franken:

“I was invited and unaware of who his guests were going to be that night. I’ve since learned that though few know this, Al Franken was actually a writer for the show.

“I made a statement about the budget numbers, Franken challenged me, I challenged him back. It was about spending priorities, actually just a mundane discussion. But he obsessed over it.”

So where exactly is the problem? Is Morgan not used to being questioned when she makes incorrect statements about the federal budget?

Morgan then went on to allege:

“He approached me backstage, angrily called me out on those numbers and insisted he would prove he was right. He wouldn’t leave me alone, he kept following me. As a woman, his presence and proximity to me felt very threatening and intimidating.”

OK, so maybe Franken was adamant about making sure Morgan knew his thoughts on the issue. But she felt threatened by him?

After the show, Morgan alleges that Franken got her number from a producer and called her to tell her again she was incorrect about her budget numbers. Did he ask her for a date? No. Did he ask her if she liked to use a loofah in the tub the way disgraced Fox News host Bill O’Reilly did with one of his victims? No, he didn’t. Here’s what he did:

“I became fearful and called Carol [the producer] to complain and asked her to tell him to back off. But he made another call after that. I thought that he might end up stalking me at my home in Northern California, it was that bad.”

“I never forgot that experience and it informed me of his lack of character and obsessive personality.”

You never forgot the fact that someone challenged your fuzzy numbers, Ms. Morgan? You were “stalked?” Come on! Leann Tweeden had a legitimate complaint, but Melanie Morgan is just begging everyone to pay her some attention. That’s the very definition of pathetic.