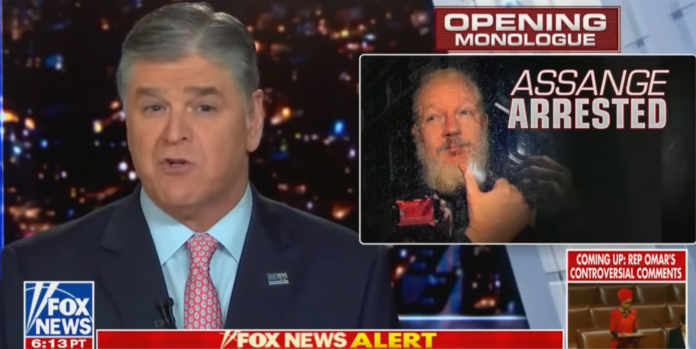 According to Fox host Sean Hannity, WikiLeaks founder Julian Assange, who was arrested Thursday in London and has been charged by the U.S. government with conspiracy to hack government computers, is a hero who deserves our admiration.

On his show Thursday evening, Hannity used his opening monologue to pivot from a defense of Assange to a full-throated attack on the media, claiming the press “has spread a baseless lie that (Assange) was the key to Russian collusion.” He then added:

“As a matter of fact, if you look at WikiLeaks’ record, they never printed a single thing proven untrue in like 12 years. Whether you like their work or don’t, that’s a much better track record than the fake news media mob here in America that has been doing nothing but lying and peddling you conspiracy theories for two-and-a-half years.”

However, Assange hasn’t been accused of anything related to his rights as a “journalist.” Instead, the Department of Justice alleges that he conspired with Chelsea Manning to break into government computers and databases to obtain information that was later posted on the WikiLeaks site. Journalists are indeed protected by the First Amendment. Hackers, however, are not protected because they deliberately chose to break the law.

The Fox host also couldn’t resist taking a shot at Special Counsel Robert Mueller, remarking that Assange “could have been the guy that offered computer forensics that would prove exactly where that information came from.

How was he supposed to question Assange, who was holed up in the Ecuadorian embassy? As usual, Hannity failed to provide any actual logic or facts to support his specious and ridiculous rantings.

Also, as The Daily Beast reports, Mueller did indeed focus on the hacking aspects of Russia and the 2016 election:

“Mueller’s indictments and reporting over the past two-plus years, however, have shown that Russian hackers were responsible for hacking the emails and began releasing the information in June 2016 through the persona ‘Guccifer 2.0’—traced to an officer of Russia’s military intelligence directorate (GRU). Mueller has also revealed in indictments that WikiLeaks contacted Guccifer 2.0 in June and that stolen emails were sent to WikiLeaks the following month.”

Russian hackers gave stolen information to WikiLeaks. That’s what they call a slam dunk when it comes to evidence. That aspect of the Russia connection has been proven, but it doesn’t fit Hannity’s narrative, so he conveniently chose to overlook it.

Julian Assange has allegedly committed numerous illegal acts over the years. He should be given his day in court and, if found guilty, sent to prison. It’s just that simple.