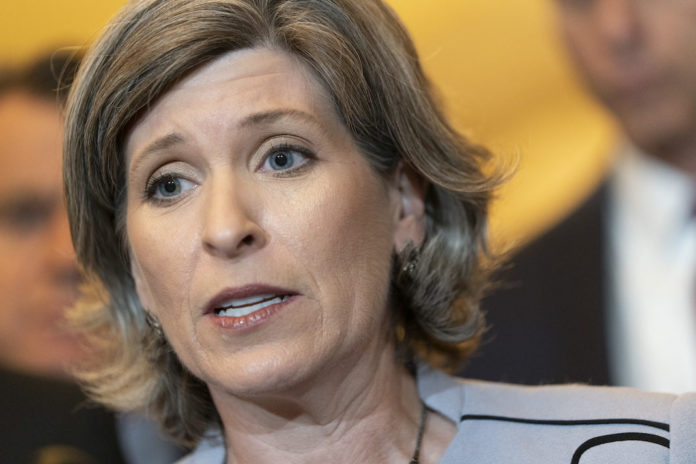 Speaking recently back in her home state of Iowa Senator Joni Ernst (R), who is seeking reelection next year, said she was “very proud” of trying to strip health care from women and would do it again if given a chance.

Ernst was a featured speaker at the Family Leadership Summit in West Des Moines, which is hosted each year by a right-wing religious group known as The Family Leader, and she began with the usual Republican claptrap about how she thinks abortion should be illegal across the country, the Des Moines Register reports:

“We all have the right to live. I believe in innocent life and I think if we are out there promoting it, we will continually win.”

And yet, the majority of Iowans (54 percent) think abortion should be legal in most or all cases. That’s a increase of six percent from a poll taken back in 2008.

Ernst also told blatant lies about babies being born and then killed by doctors. That’s the very same lie President Donald Trump is fond of spouting on the campaign trail. For her part, Ernst remarked:

“My heart just hurts when we talk about these issues and when I think about these children that are going through those botched abortions. One, we want to prevent abortion. But if a baby is born and lives through an abortion, don’t we absolutely have the duty to make sure that we are protecting that living, born alive child?”

But the facts don’t support such a ludicrous assertion:

Federal data suggests that very few U.S. babies are born alive as a result of failed abortions, according to an Associated Press fact check. The Centers for Disease Control and Prevention recorded 143 deaths between 2003 and 2014 involving infants born alive during attempted abortions.

That’s when Senator Ernst noted that she was proud she voted to cut off all federal funding for Planned Parenthood, even though it provides health care services and contraception to millions of women across the country:

She’s proud of that, even though, as Erin Davison-Rippey, Planned Parenthood Iowa state executive director, noted in February:

“Other providers simply cannot and do not fill the gap when Planned Parenthood is barred from serving patients. Regardless of these egregious attacks on our patients, Planned Parenthood isn’t going anywhere. Our doors remain open and we will work with each patient to ensure they receive the care they need.”

Senator Ernst has also repeatedly voted to destroy the Affordable Care Act (aka Obamacare). If she’d been successful, nearly 200,000 Iowans would have lost their health insurance and 1.3 million would have no longer had protections for preexisting conditions.

So Joni Ernst is proud to be so callous that she would deny people in her state decent, affordable health care? Sounds like she needs to be defeated in 2020 and sent packing.