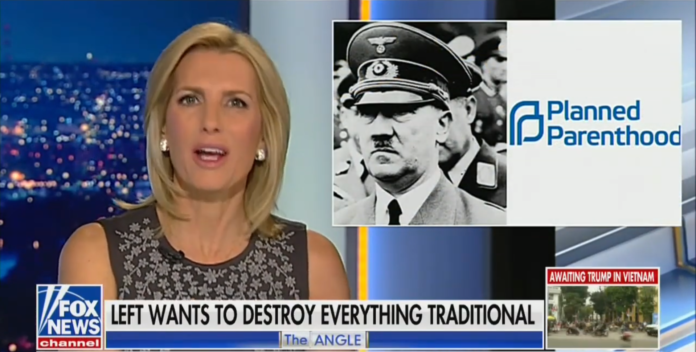 According to Fox News host Laura Ingraham, Planned Parenthood is in the same class with genocidal German leader Adolf Hitler, because both of them defended and practiced mass extermination.

Referencing a bill blocked by Congressional Democrats that would have added new requirements for the care of infants born after failed abortions, Ingraham slammed noted feminist Gloria Steinem for saying that Hitler opposed abortion, too:

“Well I’m afraid Gloria is getting a bit dotty in her old age. She’s essentially arguing that in order to save humanity, you have to kill off more humans. And notice how Steinem practices the art of self-projection? Hitler, just like Planned Parenthood, practiced and defended mass extermination all in the name of racial purity.”

The Fox host then attacked reproductive rights pioneer Margaret Sanger, a favorite boogeyman for right-wing zealots who oppose women’s reproductive rights, suggesting that Democrats are part of what she called the left’s “dark evangelism.”:

“But my friends, once a party embraces this nihilism, this dark religion by treating abortion like a sacrament, all reason goes out the window. What happened to safe, legal and rare? Their unwavering defense of abortion on demand, even if it leads to infanticide or — let’s say the embrace of other issues like gender fluidity. Even if that leads to rank unfairness, we’re going to get to that issue later on in the show. It’s akin to a secular Sharia law among the left. You deviate from what the social justice warriors stipulate today and they will decapitate you in the workplace and in school if they have their way. These people are fanatics, they’re zealots, hell-bent on a complete upending of the social order, and upending of just about everything that embodies or even comes close to embodying tradition.”

That false premise led to Ingraham attacking every Democrat seeking the White House in 2020:

“Every one of the announced 2020 presidential Democratic candidates voted no. Senators Gillibrand, Booker, Harris, Klobuchar, Warren and Bernie Sanders voted to support the wanton extermination of children already born. Along with Planned Parenthood, they claim that the bill would limit reproductive rights.”

The blatant hypocrisy of Ingraham’s ranting is obvious. She wants to make abortion illegal but has no problem watching as the Trump administration separates immigrant children from their parents and places them in internment camps for months on end.

If conservatives want to claim they care about the rights of children before they’re born, they need to be consistent and show some compassion for those same children once they’re in this world. Clearly, their only real goal is to control what women can do with their bodies.