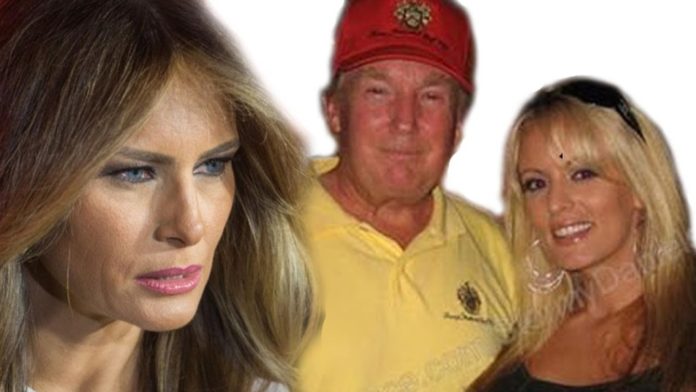 According to the The Blast, Daniels has a dress she wore during her affair with Trump, and is turning it over to a forensic lab for DNA testing:

“Sources close to Daniels [say] the shimmering gold mini dress with a plunging neckline was kept in pristine condition after her alleged 2006 sexual encounter with Trump at the Lake Tahoe hotel suite.

Daniels is planning on having the dress forensically tested to search for any DNA that proves she isn’t lying about her tryst with Trump, including samples of skin, hair or … anything.”

During the impeachment trial of former President Bill Clinton, one of the pieces of evidence used to determine if indeed Clinton had been involved with White House intern Monica Lewinsky was a dress which was tested for DNA and determined to have the 42nd president’s semen on it.

Earlier this week, Trump’s personal attorney, Michael Cohen, said he he had personally paid $130,000 in hush money to Daniels in order to keep her from talking about her relationship with Trump. However, some legal experts suggest that Cohen’s admission voids the non-disclosure agreement Daniels signed when she agreed to take the cash in exchange for her silence. It could also create new legal complications for the president.

“I was all dressed up because I had just assumed that we were going to go to dinner, but he meant to have dinner in his room. The sex was nothing crazy.”

Considering that the payment made to Daniels by Cohen was done just prior to the election in November 2016, Special Counsel Robert Mueller may also be interested in the results of the DNA test.