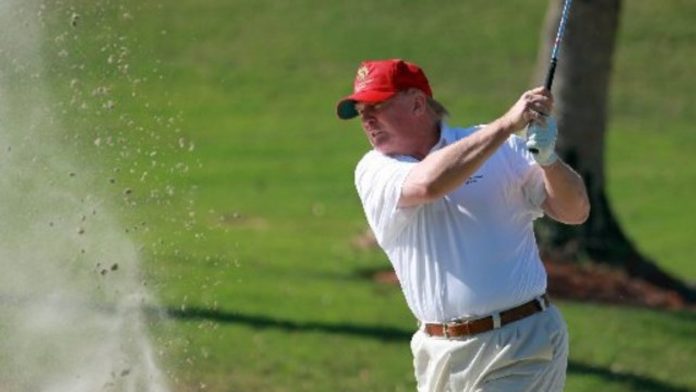 President Donald Trump headed to his golf club in Bedminster, New Jersey, Friday, his 16th visit to the club since he took office, bringing the total travel and security costs for his golfing obsession to $108.1 million.

Heading into Friday, Trump had spent 60 days at his course in Northern Virginia, 59 days at Bedminster and 57 days at his resort in West Palm Beach. He has also visited his courses in Los Angeles; Doral, Florida; Jupiter, Florida; Scotland and Ireland ― all on the taxpayer dime.

Trump’s use of Air Force One, even the smaller version he used Friday, and Marine Corps helicopters both in Washington and New Jersey drive up costs to taxpayers, and the long weekend will add at least $1.1 million to his grand total, according to a HuffPost analysis.

You may recall that when he was running for office in 2016, Trump often criticized President Barack Obama for playing too much golf. Trump even told voters that if he were elected, he’d be far too busy doing the job of president to take a vacation or play golf.

But the facts prove that Trump is indeed getting plenty of vacation time:

Since taking office, Trump has spent 187 days, counting Friday, on a course that he owns. (He has spent two additional days on courses in Japan at the invitation of Prime Minister Shinzo Abe during visits there.) That is two and a half times the number of days Obama had visited golf courses at the same point in his first term. And because Trump insists on playing at his own courses in Florida and New Jersey so much, his golf-associated costs to taxpayers are more than triple Obama’s figure through the same time period. Obama played the vast majority of his rounds at military bases within a short drive of the White House.

The lies and hypocrisy of this president are enough to justify him not being reelected in 2020. But the biggest reason of all may be the fact that we simply can’t afford to support the lavish lifestyle of a man who refuses to do any work but makes sure to take leisure time and then send us the bill.