The United States Blues
Home National News Trump administration fining some immigrants up to $500,000 for not self-deporting themselves 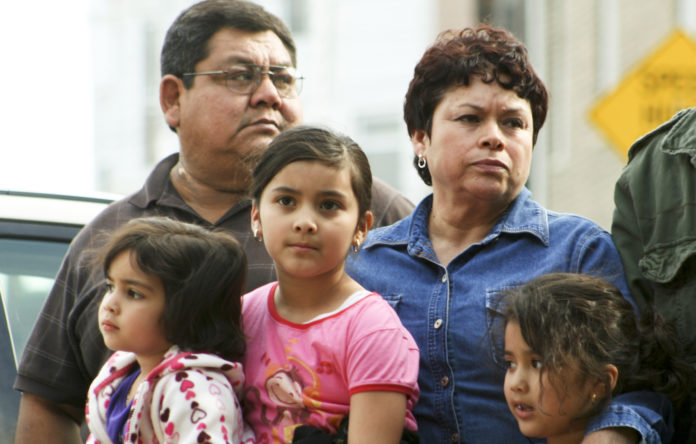 As the Trump administration prepares to start rounding up thousands of migrants and deporting them from the United States, the Department of Homeland Security (DHS) is also fining some immigrants hundreds of thousands of dollars for failing to self-deport themselves, according to NPR:

The Department of Homeland Security sent out a batch of notices across the country to targeted individuals ordering them to pay fines of up to nearly $500,000 for “failing to depart the U.S. as previously agreed,” among other factors.

In one of those letters, a woman was informed that she owed a fine of almost a half million dollars:

“It is the intention of ICE to order you pay a fine in the amount of $497,777,” Lisa Hoechst, U.S. Immigration and Customs Enforcement officer, wrote to Edith Espinal Moreno in a letter dated June 25, 2019, obtained by NPR from lawyers for Moreno.

All of this comes as a result of an executive order President Donald Trump signed not long after he took office. The order reads:

“As soon as practicable, and by no later than one year after the date of this order,” the administration will begin collection of “all fines and penalties that the Secretary is authorized under the law to assess and collect from aliens unlawfully present in the United States.”

ICE spokesman Matthew Bourke defended the use of such massive fines, commenting:

But some say the fines are just another way to both intimidate and confuse immigrants. Leon Fresco, who served as deputy assistant attorney general for the Office of Immigration Litigation in the Obama administration, noted:

“It’s a vivid illustration of the lengths the Trump administration will go to use any available authority to try to enforce immigration law. I have not seen a $300,000 fine for failing to facilitate one’s own removal.”

Espinal, who received the nearly half-million dollar fine, has been living in sanctuary at a church in Ohio since a judge ordered her deportation from the U.S. two years ago. She said she knows the government is trying to instill fear into her:

“They want to scare me, because they know I am in sanctuary. And they know I don’t have this amount of money.”

Activists in the sanctuary movement say they won’t allow the administration to force them to abandon their actions to protect immigrants from deportation. Isaac Villegas, pastor of Chapel Hill Mennonite Fellowship, in Chapel Hill, North Carolina, told Religion News Service:

“We understood from the beginning that the federal government does not approve of us taking care of our people. We’re on different sides of history on that matter. We know they’ll do whatever they can to intimidate us.”