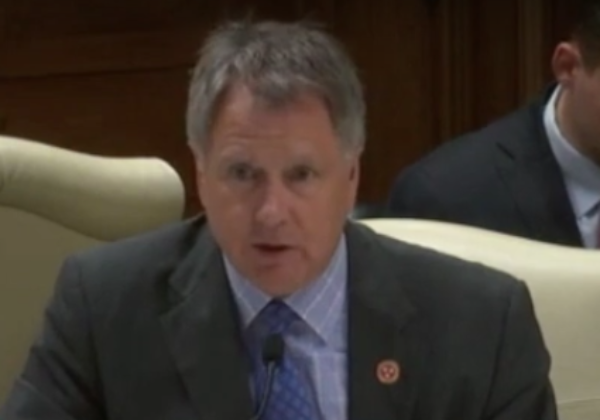 Higher education in America is under direct threat by Republicans, and a Tennessee GOP state senator is now calling for abolishing it after calling it a “liberal breeding ground.”

During a hearing to hear testimony on a bill that would ban abortion entirely in the state, Republicans cut the mic of Sister Reach CEO Cherisse Scott, who argued passionately against the legislation by slamming Republicans for using the Bible to justify white supremacy and oppression.

She’s not wrong. Just as racists used the Bible to justify slavery, Republicans are using the Bible today to promote white nationalism and discrimination, particularly against people of color and women.

Of course, Republicans don’t want the truth spoken in the halls of power, so they cut her mic and had her removed from the chamber.

Later on, state Senator Kerry Roberts (R) whined about Scott’s testimony and claimed she had been indoctrinated by institutions of higher education, which he characterized as “liberal breeding grounds” and called to abolish them.

Scott received “every liberal bit of indoctrination that you can get in a university setting today,” Roberts began. “You’ve got all of these intersects nowadays and white supremacy and oppressive this and every buzzword in the liberal lexicon is being thrown at us by some woman who’s not even talking about the legal argument. She’s just going off on something and she is some Minister for Jesus Christ in the inner city, and we’ve never done anything for black people and we’re just hate-filled idiots. Then she’s just getting louder and louder, louder.”

He then called for abolishing higher education and claimed doing so would “save America”.

“If there’s one thing that we can do to save America today it is to get rid of our institutions of higher education right now and cut the liberal breeding ground off,” he said. “The stupid stuff that our kids are being taught is absolutely ridiculous. And this is a woman who’s a product of higher education, she’s learned all of this stuff that flies in the face of what we stand for as a country. And here we are as legislators paying for this garbage to be taught to our children.”

By garbage, he means science and facts, because the more educated a citizen is, the more likely they are to reject Republican ideology. After all, President Donald Trump himself has professed to “love the poorly educated.”

Roberts concluded by seemingly suggesting that red states should do something to destroy higher education.

“And we’re not doing anything about it and all these Red states across America, we let it exist, and it’s absolutely unbelievable,” he said.

Republicans have been waging war on education for years now in an effort to make voters less intelligent and more able to be manipulated.

It’s ironic, however, that Roberts is so eager to abolish higher education considering he received one himself. Clearly, he ignored the education part.