The United States Blues
Home News This is how Peggy Noonan got owned when she insulted Congressional women... 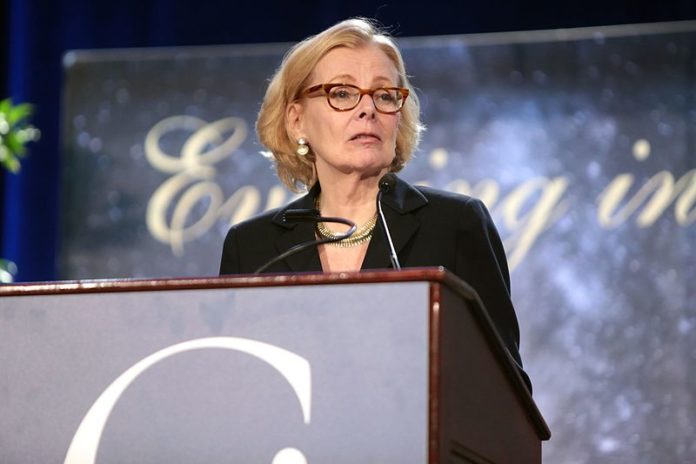 Former Reagan speechwriter Peggy Noonan humiliated herself on Twitter Tuesday night during the State of the Union by mocking what female House Democrats were wearing, taking particular aim at Rep. Alexandria Ocasio-Cortez (D-N.Y.).

In a show of unity during the speech, Democratic congresswomen wore white attire to honor the women’s suffrage movement 100 years after women gained the right to vote. The visual was powerful, especially since a record number of women are serving in Congress.

“Wearing suffragette white is a respectful message of solidarity with women across the country, and a declaration that we will not go back on our hard-earned rights,” Rep. Lois Frankel (D-Fla.) told CNN.

Apparently, Noonan did not feel the same way about women’s rights because she criticized their attire on Twitter by comparing it to straitjackets, a word she couldn’t even use correctly. She also attacked Ocasio-Cortez for not smiling during President Donald Trump’s speech.

And good natured with the white jackets, who I see some on twitter are calling the straight jackets. AOC had a rare bad night, looking not spirited, warm and original as usual but sullen, teenaged and at a loss. 2.

As we all know, there’s a special place in hell for women who don’t support other women, and twitter users gave her hell for such an insulting attack.

You win a Pulitzer for commentary and this is the best you can do? You sound bitter and envious. It’s a terrible look for a grown up.

And put the liquor back in the cabinet..

Right. POTUS told verifiable lie after lie and AOC had a bad night? What are you smoking?

1. This is a tired take, roughly on a par with “Get off my lawn you danged youngsters”.
2. It’s more commonly spelled “strait”, not straight, even though the latter has slowly become more acceptable. With either spelling, it’s one word, not two.

So you’re saying she should have smiled more? Classy.

While a crazy POTUS rambling nonsense on stage, you single out someone in the audience? Do better.

Yeah she really messed up by not throwing a party when the president talked about destroying lives and enforcing a broken economic system. You’re correct

Poor Peggy Noonan, left behind by her party, her church, her ex-husband. As she nears 70 and realizes it’s all past her now. Rather than go gracefully, she sits on that stained couch with her dying cats mumbling “I wrote kindler, gentler” and this teen is more famous than me.

As for Ocasio-Cortez, she swiftly fired back at Noonan by pointing out Trump’s speech was not impressive.

Why should I be “spirited and warm” for this embarrassment of a #SOTU?

Tonight was an unsettling night for our country. The president failed to offer any plan, any vision at all, for our future.

We’re flying without a pilot. And I‘m not here to comfort anyone about that fact. https://t.co/7bu3QXFMnC

Noonan should be ashamed of herself. Without the women’s movement she would not have the right to vote and she certainly would not have been a presidential speechwriter or a columnist for the Wall Street Journal. She should have been respectful and supportive of all the Democratic women who beautifully and gracefully wore white to make a powerful statement in solidarity with women everywhere. Instead, she betrayed women and embarrassed herself by joining in on the hateful anti-women sentiment that has taken over her own party.