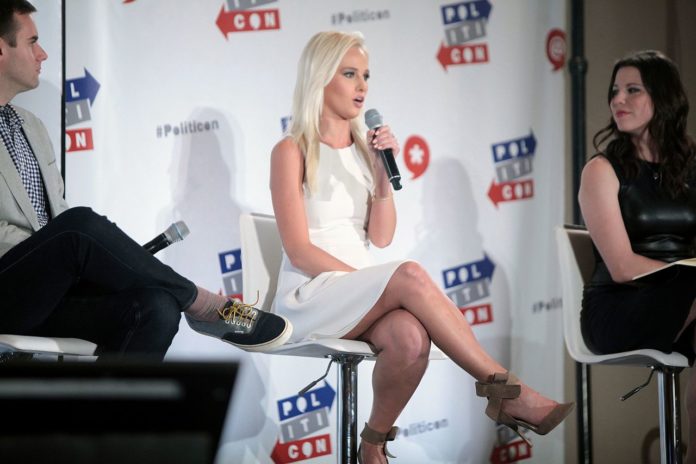 Fox News contributor Tomi Lahren is taking fire over a Twitter post in which she encouraged her fans to steal food from liberals to somehow teach them a lesson about immigrants.

Lahren is strongly opposed to immigration and supports President Donald Trump’s anti-immigration policies, which are opposed by Democrats.

But Lahren thinks she knows how to teach liberals a lesson.

Calling it a “game,” Lahren urged her fans to go to Whole Foods with several family members and steal food from customers. Of course, Lahren is assuming that conservatives don’t grocery shop at Whole Foods, which was her first ridiculous notion.

Lahren believes that by stealing food from liberals, it’ll serve as a lesson about immigration.

Let’s play a game! Go to Whole Foods, pick a liberal (not hard to identify), cut them in line along with 10-15 of your family members, then take their food. When they throw a tantrum, remind them of their special affinity for illegal immigration. Have fun!

Not only would Lahren’s fans be disruptive at a place of business, which can result in a citation or getting arrested, but the lesson is nonsense because many undocumented immigrants work on farms that produce food for the country. Plus, stealing is a crime, and undocumented immigrants are less likely to commit crimes than native-born Americans. In short, Lahren’s fans would be proving that point by listening to her.

Lahren herself could be arrested for inciting criminal actions.

Why because Mexicans pick all the produce that you can’t do?

Are you still on your parent’s insurance?

In the civil law world, taking my groceries would constitute battery (prolly something similar out there for criminal law): https://t.co/iMPmZ6i5km pic.twitter.com/0ecbYjYXW9

Here’s a better game. Be quiet. Extend that for an eternity. You win

Let’s play a game! Go to Bass Pro Shops, pick a conservative (not hard to identify), cut them in line along with 9 of your family members, then take their guns. When they throw a tantrum, remind them of their support taking our hard-earned money through the #GOPTaxScam. Have fun!

Let’s play a game. Go travel to another country, observe we all have the same problems, grow up and treat each other as equals.

Let’s play a game! Be born with every advantage, remove your brain, become super racist and see if you can get a job with a major cable network. You win!

Hit up a Trump rally and ask the attendees if they can spell “broccoli”.

Your persecution complex is growing tiresome.

Imagine being given every advantage in the world and all you can think to do with it is to complain about the lives of people so much less fortunate than you.

You are an embarrassment.

Half of her followers learned that Whole Foods started with a “W” today, so we can give her credit for that

Once again, Lahren gets her ass handed to her after saying something stupid to attack immigration.

It’s just like that time she complained about undocumented immigrants not speaking English only to find out that her own ancestors didn’t speak English when they got here and some never learned. One was even indicted for forging naturalization papers.

Except the 1930 census says Tomi’s 3x great-grandmother had been here for 41 years and still spoke German.

Her 2nd great-grandmother had been here for 10 yrs. Spoke no English.

Her great-grandfather’s 1895 baptism from MN? Recorded in Norwegian.#resistancegenealogy #receipts pic.twitter.com/rIySFu6fvL

Also remember that Tomi Lahren, who just lurves to complain about illegal immigration, had a great-great-grandfather indicted by a federal grand jury for forging his naturalization. He was acquitted at trial, thus allowing her to share her shards of brilliance with us in 2018.

Tomi Lahren can go ahead and stop talking about immigration now. She embarrassed herself enough already.