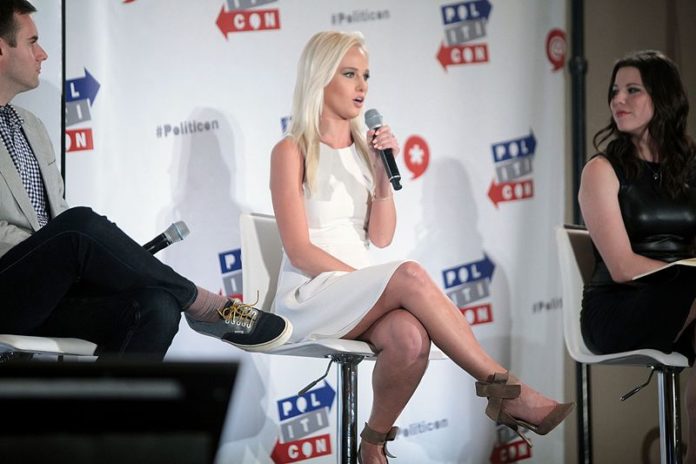 Apparently, Fox News contributor Tomi Lahren learned nothing from Laura Ingraham’s mistakes, because she is getting her ass handed to her right now for attacking the Parkland school shooting survivors on Twitter.

The backlash was swift after Ingraham attacked David Hogg earlier this week as sponsors of her show began pulling advertising.

So far, over a dozen companies have severed ties with Ingraham and Fox News has sent her on a “vacation.”

But the fallout could be far from over for Fox if they don’t muzzle the rest of their employees to stop them from saying equally stupid things about the teenagers.

The latest to say something stupid is Lahren, who took to Twitter on Friday to whine about how students like Hogg are fighting back against right-wing attacks.

Lahren had the gall to call herself the “leader of a movement,” although it’s not clear what “movement” she is talking about, and then told the students to “buck up” and take the criticism instead of standing up for themselves.

If you want to be the leader of a movement, you have to open yourself up for criticism and challenge. Lord knows I take my fair share of attacks and I’m okay with that. It’s what we signed up for. Buck up.

These kids survived a school shooting. 14 of their classmates were murdered and they faced death themselves. And conservatives like Lahren have been attacking them for weeks just because they had the courage to call for change rather than just remain silent victims.

These kids were backed into a corner, hoping they survive a mass shooting while attending school. They didnt sign up for any of this shit! Buck up? I believe their strength and determination speaks for itself! You buck up and learn some compassion!

What the hell kind of movement do you lead?

Did you just call yourself the leader of a movement?

Even the Fox News org chart has you listed as “Vapid Shrieking Barbie #235,177”

You are nothing more than a pandering puppet Tammi. You were born with a pretty face, it is sad that your insides are vile, putrid and venomous.

Um..You are not a leader of anything, you are an “adult”
you havent experienced mass murder at your school…and guess what?
YOU GET PAID

Wow. It has been a little over a month. Seriously? And they did not choose to be the leader of a movement! They were survivors of a mass shooting. BIG difference!

You kick your dog

Not sure what type of “leader” you think that makes you? one who bullies kids? But pathetic comes to mind.

@davidhogg111 bucked up just fine. He took the shot and swung back. He will still be marching onward next week while @IngrahamAngle is “taking a break”

Weren’t you the one crying how how unfairly you were being treated by Glenn Beck? #snowflake

Perhaps companies should start pulling ads from every Fox News program that Tomi Lahren has appeared on as a contributor. Or better yet, pull ads until Fox News terminates her employment. Because while Lahren has the right to free speech, she’s an adult who should have to “buck up” and face the consequences of her words.