The United States Blues
Home National News Treasury Secretary Mnuchin could wind up in jail if he refuses to... 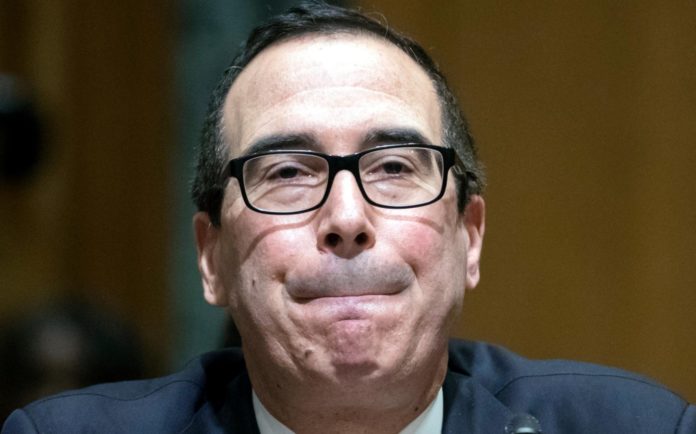 Treasury Secretary Steve Mnuchin is about to be faced with a decision that could have catastrophic consequences for him if he refuses to turn over President Donald Trump’s tax returns to Congress.

Just last week, Rep. Richard Neal (D-MA) formally requested Trump’s taxes from the IRS and asked them to be delivered no later than this Wednesday, April 10. But it remains unclear if Mnuchin will give the tax documents to the chairman of the House Ways and Means Committee.

But as former Secretary of the Treasury Lawrence Summers noted Monday evening on “The Last Word,” Mnuchin could find himself in jail if he doesn’t comply with Congressman Neal’s request, which is based on a 1924 federal law. Summers told MSNBC host Lawrence O’Donnell:

“For Secretary Mnuchin to seek to decide whether to pass on the president’s tax returns to Congress would be inappropriate and illegal.”

That led O’Donnell to remark:

“I did not know that the delegation from the Treasury Secretary to the IRS Commissioner on matters of tax issues like this was actually in writing and that it’s a formal delegation and there’s a formal process for revoking that delegation.”

“And that applies to a request of this kind and for good reason.”

Translation: The IRS commissioner is supposed to make the call on the issue of releasing tax returns, not the Treasury Secretary.

The comments from former secretary Summers came on the same day he wrote an insightful op-ed for The Washington Post which read in part:

“The appropriate response of the Treasury Secretary is very clear: Under a long-standing delegation order, the Secretary does not get involved in taxpayer-specific matters and has delegated to the IRS commissioner as follows:

“‘This is not a delegation that is revocable.'”

Steve Mnuchin is caught between the proverbial devil and the deep blue sea. If he turns over Trump’s taxes, he will infuriate the president and possibly lose his job. But if he doesn’t, he would be in violation of the law and could be tossed into jail by a federal judge.

Things are about to get very interesting in the days ahead.