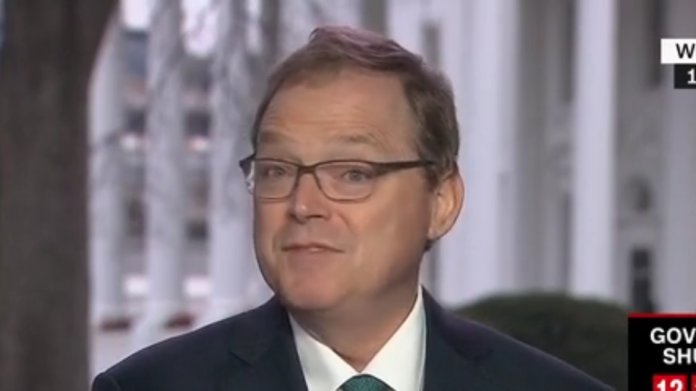 As the stock market was tanking yet again Thursday, the chairman of the White House Council of Economic Advisers, Kevin Hassett, finally admitted what his boss has been denying for over a year: The Trump-initiated trade war is causing American companies to lose a lot of money.

Appearing on CNN, Hassett was asked about Apple downgrading its stock and economic forecast for 2019. He responded:

“There are a heck of a lot of U.S. companies that have sales in China that are going to be watching their earnings being downgraded next year until we get a deal with China.”

What Hassett failed to say is this: If there’s no trade deal (and it doesn’t look promising right now), American companies are going to lose money, cut workers, and the U.S. economy will be plunged into a recession.

And Apple isn’t the only American company suffering thanks to Trump’s excessive tariffs on imports.

FedEx CEO Frederick Smith said recently that “most of the issues that we’re dealing with today are induced by bad political choices,” citing the trade war.

And let’s not forget GM is closing five plants and cutting 14,000 jobs because tariffs have already cost the automaker over $1 billion.

Then there’s the stock market, which had it’s worst December in a decade, losing all of its gains for 2018.

But despite his admission that businesses are suffering badly thanks to Trump’s misguided economic policies, Hassett had the nerve to say there wouldn’t be a recession anytime soon.

So, instead of calming the market, Hassett has now admitted that the White House is well aware their policies are a failure, but we can expect more of the same in the future. That alone could lead to a complete meltdown of stocks in the weeks ahead.

The American economy is being run by a man who had to declare bankruptcy when casinos he owned lost money. Casinos never lose money! Unless, of course, they’re run by the most incompetent businessman on the planet, Donald J. Trump.