The United States Blues
Home News Giuliani Proclaims: My Response To Mueller’s Report Will Be The ‘Definitive Report’... 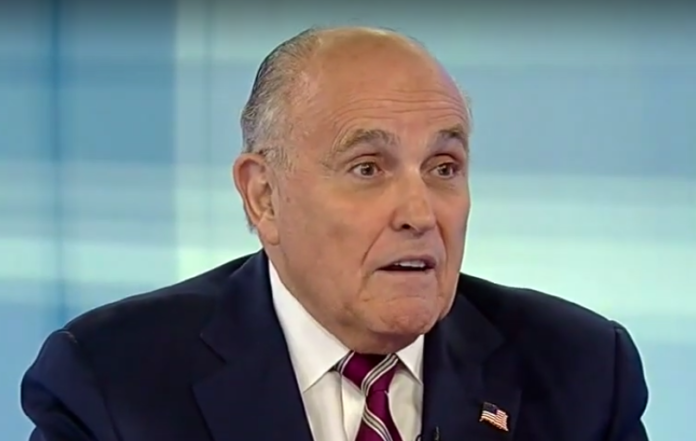 Rudy Giuliani clearly doesn’t understand what the word “definitive” means after he used it to describe his response to Special Counsel Robert Mueller’s highly anticipated final report that could be released later this year.

Mueller’s report will finally reveal long awaited results of an investigation that has spent the last two years probing President Donald Trump’s ties to Russia and whether or not he colluded with Russia during the 2016 Election and committed obstruction of justice to cover up the alleged crime.

Last month, Trump took to Twitter to claim that his legal team is preparing a counter report and that it’s already 87 pages in length:

It has been incorrectly reported that Rudy Giuliani and others will not be doing a counter to the Mueller Report. That is Fake News. Already 87 pages done, but obviously cannot complete until we see the final Witch Hunt Report.

We will be doing a major Counter Report to the Mueller Report. This should never again be allowed to happen to a future President of the United States!

During an interview with Sean Hannity on Fox News, Giuliani told Trump’s favorite propagandist that his response to Mueller will be the “definitive report.”

But first, he attacked Mueller:

“Here’s the mentality,” Giuliani began in reference to Mueller and his team. “I know these people. I knew him before I was mayor. I knew him when I was mayor. These people are on a moral high ground. They can justify any means for their end, which is to save the country from Donald Trump and put it in the hands of Hillary Clinton or someone else.”

Hannity wanted to know when Hillary Clinton and everyone else Trump considers his enemies in the Justice Department and FBI will be prosecuted for their imagined crimes.

Giuliani responded by claiming that what Clinton, former FBI Director James Comey and others supposedly did are worse crimes than anything Trump and his associates have done, even though federal prosecutors have indicted several of Trump’s associates, including Michael Cohen, who implicated Trump as an unindicted co-conspirator who coordinated and directed campaign finance felonies.

“When does this end?” Hannity asked.

“It ends when he files his report and we can answer it, whatever garbage he has,” Giuliani said.

“Will there be a Giuliani report?” Hannity asked next.

“Damn right there will be a Giuliani report,” Trump’s lawyer claimed. “Our report will be the definitive report cause it will be the truth. The president did nothing wrong.”

The fact is that Giuliani has no idea what evidence Mueller has or does not have against Trump, so he doesn’t know what the final report is going to say. Furthermore, if Mueller’s report implicates Trump, he must have a truckload of evidence to back it up.

And frankly, there’s nothing Giuliani can say in his counter report that will wash away all of the things Trump has said and tweeted incriminating himself over the last two years. Mueller has all of it, and you can bet he’ll use it. Giuliani and Trump have also delegitimized any response they submit because of their constant lies and misleading claims.

As for Mueller’s motive for investigating Trump, it’s certainly not to put Clinton in the White House. His job is to investigate Russian interference with the 2016 Election and whether or not there was collusion or obstruction. And that’s exactly what he has been busy doing since he took over the probe. Mueller has been working silently and diligently building his case while Giuliani has been doing nothing but running his mouth and saying nothing that helps his client. If anything Giuliani has spent most of his time sabotaging Trump’s defense.

Make no mistake, Mueller’s final report will be the true definitive report. It’s the one everyone in America has been waiting for, and unlike Giuliani’s, it will have the evidence and the law to back it up.