The United States Blues
Home News Trump grosses America out by kissing college blonde who looks like his... 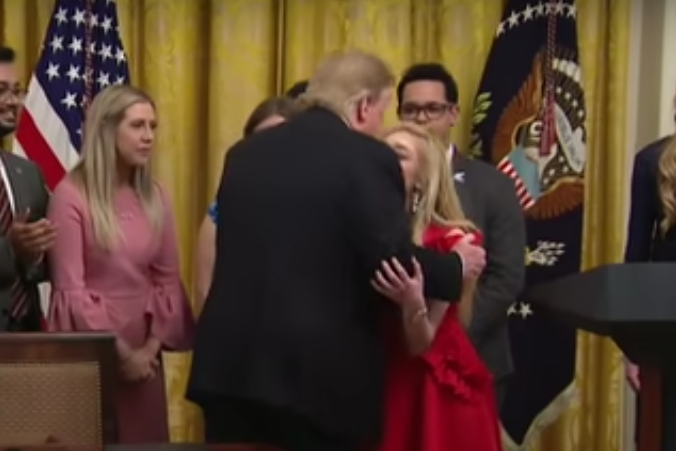 The order threatens federal funding cuts against schools that dis-invite controversial conservative speakers and gives more power to conservatives over university officials because an accusation of free speech violations, which are largely imaginary, would threaten a school with funding cuts. Thus, it’s more like an assault on college campuses.

Trump signed the executive order at the White House. But then he spotted a young blonde woman and immediately approached her and awkwardly put his hands on her and kissed her. It’s almost as if he thought she reminded him of his daughter Ivanka.

The creepy and inappropriate incident will certainly give George Conway more ammunition to question Trump’s mental health, but it also made America sick, as Twitter users demonstrated with their comments.

“When you’re a president, they let you do it. You can do anything.”

“You remind me of my daughter…”

Donald Trump: “You know I’m automatically attracted to beautiful—I just start kissing them. It’s like a magnet. Just kiss. I don’t even wait.”

Did he think it was Ivanka?

Especially not with those who resemble his favorite daughter

He just couldn’t pass up an Ivanka lookalike.

She probably best take a pregnancy test after, just to be sure

“I’m automatically attracted to beautiful women — I just start kissing them, it’s like a magnet. Just kiss. I don’t even wait. And when you’re a star, they let you do it. You can do anything,” he said in the 2005 conversation. “Grab ’em by the pussy.” ~ Donald J. Trump.

Seriously, this is yet another example showing that Trump has zero self-control and zero respect for the office he holds. This is beyond creepy and once again embarrasses the nation.