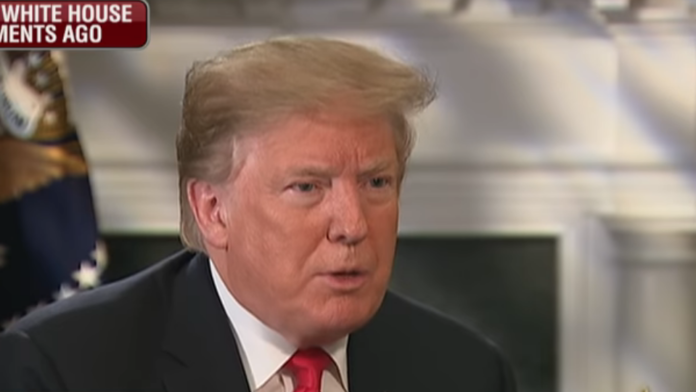 Remember all of those nasty tweets and remarks President Donald Trump has been making about the late John McCain for nearly a week now? Well, according to Trump, he didn’t really say them; he was just responding to questions from reporters.

Red alert! Houston, we have a problem!

During a new interview with Maria Bartiromo of Fox Business, Trump repeated some of his allegations against McCain:

“If you realize about three days ago it came out that his main person gave to the FBI the fake news dossier. It was a fake, it was a fraud, it was paid for by Hillary Clinton and the Democrats. They gave it to John McCain, who gave it to the FBI for very evil purposes. That’s not good. And the other thing, he voted against repeal and replace. Now, he’s been campaign for years for repeal and replace. I’m not a fan. After all of this time, think of this, repeal and replace. We would have had great health care. —”

“But Mr. President, he’s dead, he can’t punch back. I know you punch back, but he’s dead.”

“No, I don’t talk about it. People ask me the question. I didn’t bring this up. You just brought it up. You asked the question.”

What in the world?! Even Bartiromo seemed taken aback, reminding the president:

“Well, you talked about it this week.”

Once again, Trump tried to maintain that he only talked about McCain when he was asked questions:

Time for something Trump hates: Facts. The fact is that the president began attacking McCain on Twitter last Saturday, unprompted by any reporter, posting this:

Spreading the fake and totally discredited Dossier “is unfortunately a very dark stain against John McCain.” Ken Starr, Former Independent Counsel. He had far worse “stains” than this, including thumbs down on repeal and replace after years of campaigning to repeal and replace!

And during a speech in Ohio Wednesday, Trump even claimed that he arranged for McCain to be buried with honors. That’s a blatant lie. Burial with full honors can only be granted by Congress, not the president.

The only question that remains now is whether this unhinged maniac we call the president is so mentally confused that he cannot recall what he’s said a day ago or if he’s just lying to provide cover for his disgusting attacks on a deceased war hero.

No matter which one of these options is the case, one thing remains clear: Donald Trump is unfit for office.

This Trump-Maria Bartiromo exchange on McCain is wild. He calls McCain “horrible.”

BARTIROMO: But Mr. President, he’s dead, he can’t punch back. I know you punch back–
TURMP: No.
BARTIROMO: –but he’s dead.
TRUMP: I don’t talk about it. People ask me the question. pic.twitter.com/bgdS3sD0el