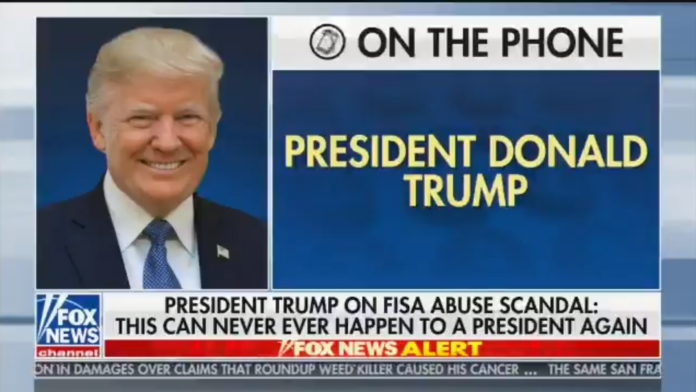 President Donald Trump lashed out at his critics and the Mueller investigation during an extensive interview with Fox host Sean Hannity Wednesday evening, suggesting that he may pardon those who were charged in the Russia probe and hinting that he will indeed try to punish his political opponents for daring to investigate him.

Over course of the interview, Trump also claimed that had William Barr been attorney general at the beginning of his administration instead of Jeff Sessions, the Mueller investigation would have never begun in the first place:

“Had (Barr) been there initially, this all would not have happened.”

The president suggested that had Republicans dared to investigate former President Barack Obama for conspiring with a foreign country, those who conducted the probe would be in prison:

Asked if he planned to pardon those who had been convicted or pleaded guilty over the course of the special counsel’s two-year investigation, Trump replied:

“Many, many people were hurt, incredibly hurt, by this whole scam. I don’t want to talk about pardons now, but … it’s so sad on so many levels.”

However, the president didn’t say why the full Mueller report has yet to be released or if he still favored releasing the entire document, which is said to be at least 700 pages long. Attorney General Barr has not yet said if or when he will make the report available to Congress or the public.

While Trump is claiming vindication, Fox legal analyst Andrew Napolitano said Wednesday that the Mueller report likely does contain some evidence that the president was part of a conspiracy and acted to obstruct justice, telling Fox Business host Neil Cavuto: