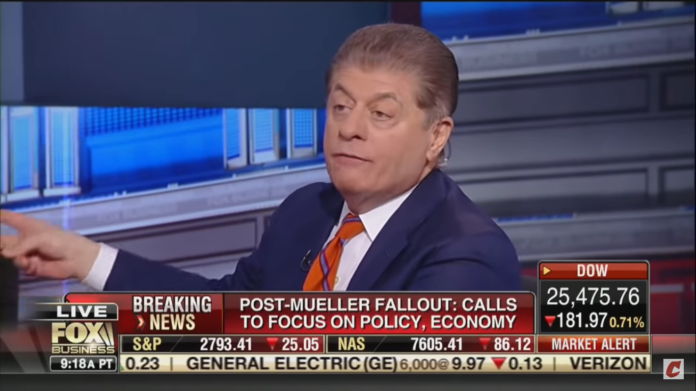 Fox legal analyst Andrew Napolitano is warning the White House and Trump supporters that the full Mueller report probably does contain evidence pointing to a conspiracy and obstruction that will be politically damaging to the president.

Napolitano also said that since Attorney General William Barr didn’t definitively say there was “no evidence of conspiracy and no evidence of obstruction,” then it stands to reason there must be some evidence, and that can be used to destroy Trump politically.

From what we’ve seen so far from the attorney general, Napolitano also noted, we can extrapolate that some decisions were made by Special Counsel Robert Mueller and Barr:

“On the conspiracy charge…Mueller, Rosenstein, Barr are on the same page. There is something there, but it is not enough to prove guilt beyond a reasonable doubt.

Keep in mind this is a Fox News analyst saying these things. He can sense that there’s something damaging in the Mueller report, and even if it doesn’t lead to Trump being indicted or impeached, it could well be enough to ruin Trump’s chances of re-election.

So while Trump may have been doing a victory dance on Sunday, by this time next week he could be facing the prospect of having been implicated in a conspiracy with Russia and obstruction of justice. And that could well signal the beginning of the end of Donald Trump’s presidency.