The United States Blues
Home National News Trump insists next G7 should be held at his failing Florida golf... 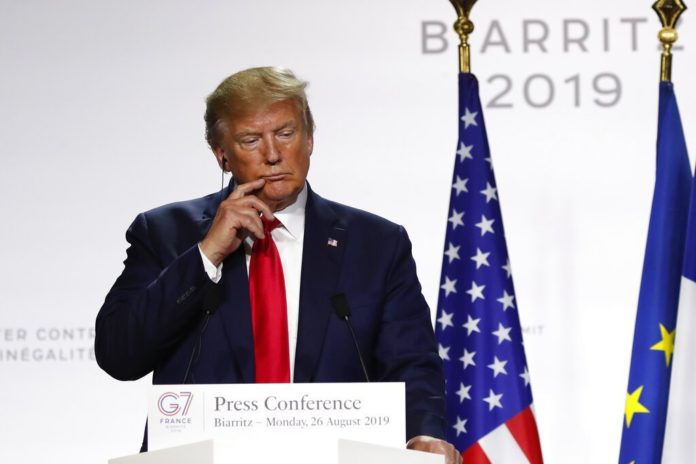 As the G7 summit in Biarritz, France, ended on Monday, President Donald Trump was already pushing for the 2020 meeting to be held at his failing golf course in Miami, according to the Washington Post:

In a news conference, Trump said that his staff had scoured the country and determined that — of all America’s resorts and resort towns — Trump’s club was the best situated to host the international meeting.

“They went places all over the country, and they came back and said, ‘This is where we’d like to be,’ ” Trump said. “It’s not about me. It’s about getting the right location.”

As the Post reported in May, the Doral location is in serious financial trouble and a major summit would be a big boom to the club:

At Doral, which Trump has listed in federal disclosures as his biggest moneymaker hotel, room rates, banquets, golf and overall revenue were all down since 2015. In two years, the resort’s net operating income — a key figure, representing the amount left over after expenses are paid — had fallen by 69 percent.

Even in a vigorous economy, the property was missing the Trump Organization’s internal business targets; for instance, the club expected to take in $85 million in revenue in 2017 but took in just $75 million.

Oddly, the president also suggested that his Doral golf club was close to the Miami airport, completely overlooking the fact that there are many luxury hotels even closer to the airport:

“Doral happens to be within Miami. It’s a city, it’s a wonderful place. It’s a very, very successful area of Florida. It’s very importantly only five minutes from the airport – the airport is right next door. It’s a big international airport, one of the biggest in the world.”

When a reporter mentioned that Trump would make a profit if the 2020 G7 was held at a place he owns, he tried to deny it, alleging that he has already lost between “$3 billion and $5 billion” while serving as president, adding:

“My people wanted it. From my standpoint, I’m not going to make any money, in my opinion. I don’t want to make money. I don’t care about making money.”

Earlier in the day, Trump also suggested he might invite Russian President Vladimir Putin to the 2020 meeting of the G7. Russia hasn’t been invited since it illegally invaded and annexed Crimea, which was formerly a part of Ukraine:

Donald Tusk, the head of the European Union’s council, however, said there was no chance that Russia would be asked to rejoin the summit:

“Under no condition can we agree with this logic.”

Here’s Trump going on an extended rant about his Doral golf club:

Trump uses G7 to promote private Doral resort he still owns and profits from, which he says may host the G7 next year: “It’s a great place. It’s got tremendous acreage … people are really liking it … we haven’t found anything that could even come close to competing with it.” pic.twitter.com/MK2vY2inK1