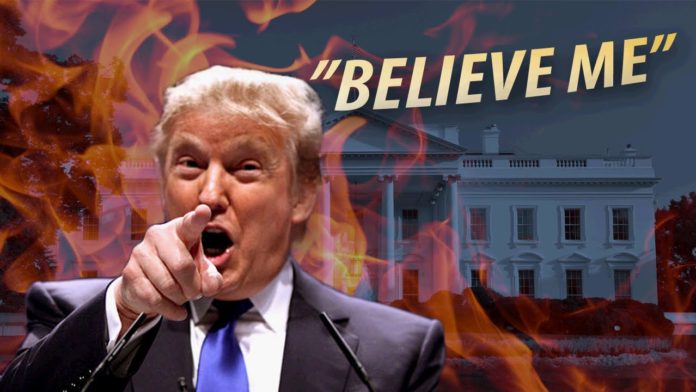 According to President Donald Trump, a new Wall Street Journal/NBC poll showing that in a match-up with a generic Democrat, the incumbent president would lose 73 percent to 5 percent is “fake news” and the result of him not getting fair media coverage:

Great cohesion inside the Republican Party, the best I have ever seen. Despite all of the Fake News, my Poll Numbers are great. New internal polls show them to be the strongest we’ve had so far! Think what they’d be if I got fair media coverage!

Things are so bad that some Republicans are saying Trump needs to be challenged in the primary. During an appearance on “Meet the Press” Sunday, former GOP Rep. Mark Sanford of South Carolina was asked by host Chuck Todd if the president deserved reelection. Sanford replied:

“I would say, no. Because I would argue that he’s taking us in the wrong direction. Just take one indicator. If you look at the business investment numbers over the last couple of months, they’ve been cratering. That’s reality. And in part, the reason they’re cratering is nobody knows what’s going to come next, in terms of trade.”

Indeed, even on the economy — the one consistent bright spot for Trump even when his own personal favorable numbers have been low — the new Journal/NBC poll shows that only 49 percent approve of how Trump is handling the economy. But 46 percent say they disapprove.

Other polls also have sobering news for Trump.

A Fox News poll released late last week shows that in a head-to-head battle with some of the top Democratic contenders, Trump loses, in some cases by double digits:

And that same Fox poll also showed the president underwater on the issue of job approval, with 46 approval and 52 percent approval.

Even a Rasmussen poll (which normally favors Republican candidates), from August 12 has 55 percent of those surveyed saying the country is one the wrong track; 39 percent said the U.S. is moving in the right direction. That 16-point spread is likely to be of special concern to top Trump reelection officials.

While Trump is trying to put a happy face on the latest polls, the fact that he cannot get much above 40 percent does not exactly bode well for him.