The United States Blues
Home Politics Congress Trump says senators who oppose him on tariffs and trade war ‘have... 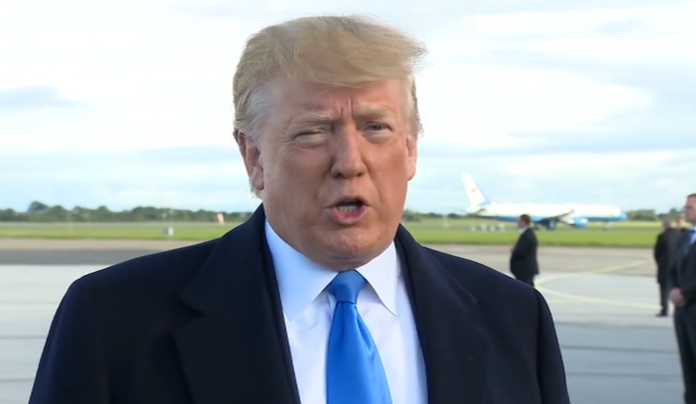 President Donald Trump said Thursday that any members of the U.S. Senate who oppose his plan to impose trade tariffs on Mexico until they stop the flow of immigrants into the United States “have no idea what they’re talking about.”

Speaking to reporters before he left for a ceremony in Normandy, France, to commemorate the 75th anniversary of the D-Day invasion that helped allied forces defeat Nazi Germany, Trump reiterated that the tariffs he has threatened against Mexico will indeed go into effect next Monday if his conditions aren’t met:

“We’ll see what happens. But something pretty dramatic could happen. We’ve told Mexico the tariffs go on. And I mean it, too. And I’m very happy with it. And lot of people, senators included, they have no idea what they’re talking about when it comes to tariffs. They have no — absolutely no idea.”

The president then claimed that the U.S. is in the proverbial catbird seat when he comes to trade with other nations:

However, the problem with Trump’s statement is the very real impact tariffs on Mexico could have. If the administration does slap a 5 percent tariffs on all goods coming from Mexico, 400,000 American workers could lose their jobs, CNN reports:

If the 5% US tariff on all goods from Mexico takes effect and is maintained, more than 400,000 jobs in the United States could be lost, an analysis released this week found.

The tariffs on Mexico, set to go in effect on Monday, would cost Texas alone more than 117,000 jobs, according to the analysis by The Perryman Group, an economic consulting firm. Texas is Mexico’s largest export market, making the two economies closely intertwined.

With data already suggesting that the U.S. economy is slowing, such a massive loss of jobs could send the country spiraling into a deep recession.

Trump has also repeatedly said that American consumers would not have to pay for his tariffs, but that claim isn’t supported by facts, according to The Hill:

The president has repeatedly maintained that tariffs will boost the U.S. economy by bringing additional money into the Treasury. But economists have noted that is not the case, and that tariffs make imported products more expensive for American consumers.

Members of Trump’s own party have said starting a trade war with Mexico would be catastrophic, with GOP senators John Cornyn (TX), Roy Blunt (MO), and Susan Collins (ME) suggesting they might try to block such a move with legislation.