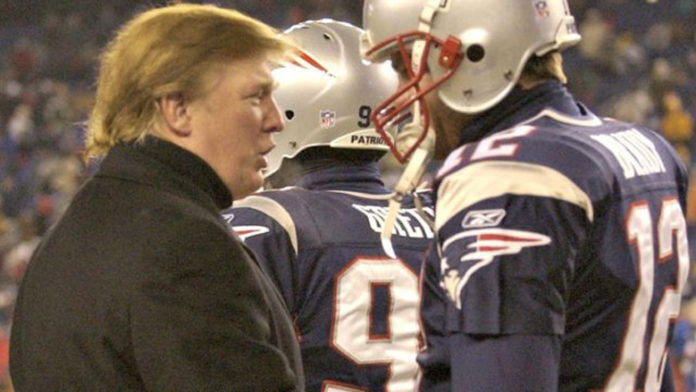 Donald Trump is flagrantly violating the First Amendment of the Constitution.

Earlier this week, Trump resumed his war against the NFL by demanding that Oakland Raiders suspend running back Marshawn Lynch for the rest of the season for standing during the Mexican national anthem.

Marshawn Lynch of the NFL’s Oakland Raiders stands for the Mexican Anthem and sits down to boos for our National Anthem. Great disrespect! Next time NFL should suspend him for remainder of season. Attendance and ratings way down.

Trump’s constant temper tantrums over this issue have caused the NFL to consider keeping teams in the locker room during the national anthem rather than violate their players’ rights.

The First Amendment of the Constitution clearly gives every American citizen the right to free speech and expression. So, if a player wants to sit during the national anthem to protest police brutality and racial injustice, they can do so.

Trump got wind of the idea on Wednesday morning, and his head exploded.

The NFL is now thinking about a new idea – keeping teams in the Locker Room during the National Anthem next season. That’s almost as bad as kneeling! When will the highly paid Commissioner finally get tough and smart? This issue is killing your league!…..

This issue is, in fact, not killing the league. NFL ratings are a little lower, but it’s nothing the league can’t handle or has not seen before. Ratings also dropped last year when there was not a boycott by petty racist conservatives.

Donald Trump is acting like a tyrant who has the power to force patriotism and national obedience upon businesses and individuals. The problem is that the president does not have that power. The Constitution is very clear on this matter. People have the right to sit during the national anthem just as much as they have the right not to recite the Pledge of Allegiance. There’s even a Supreme Court ruling that supports this.

Trump’s obsession with the NFL needs to stop. It’s beneath the presidency and only disgraces the office.