The United States Blues
Home Politics Congress Trump’s attempt to give Nancy Pelosi a nickname boomerangs back and bites... 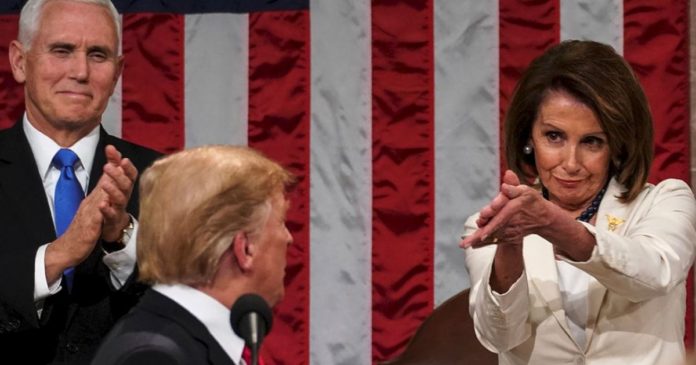 President Donald Trump’s attempt to chide Speaker of the House Nancy Pelosi (D-CA) with a nickname wound up sticking to him instead, and Twitter is lighting up with ridicule for the president.

After spending most of last week accusing Rep. Adam Schiff (D-CA) of “treason” for daring to investigate him as part of a larger impeachment inquiry, Trump is now aiming his barbs at Pelosi, claiming she’s “every bit as guilty” as Schiff and accusing her of “high crimes” and “treason.”

Nancy Pelosi knew of all of the many Shifty Adam Schiff lies and massive frauds perpetrated upon Congress and the American people, in the form of a fraudulent speech knowingly delivered as a ruthless con, and the illegal meetings with a highly partisan “Whistleblower” & lawyer…

….This makes Nervous Nancy every bit as guilty as Liddle’ Adam Schiff for High Crimes and Misdemeanors, and even Treason. I guess that means that they, along with all of those that evilly “Colluded” with them, must all be immediately Impeached!

But as Twitter users reminded the president, he’s the one that sounds nervous:

It’s always projection with him. https://t.co/UYxWoPGrE3

You are the “Nervous Nancy” in this scenario. B’bye..impeach, no pardons. b’bye tRUMP swamp.

There’s only one Nervous and “negative Nancy” here.. And it’s not Nancy.

You got the double dip going on Schiff in these tweets, but just “Nervous Nancy” for Pelosi?

Are ya scared of her?

These are words from Trump’s most recent tweet used to describe & attack other people.

The projection is stunning.

Your arrogance is exceeded only by your astounding ignorance. And you seem very, very nervous. Many people are saying it.

It’s not a crime to investigate you (yet).
She doesn’t seem at all nervous.
You, however, have been melting down on Twitter for days.#ImpeachTrumpPenceBarrPompeo pic.twitter.com/zPSBEIUDm7