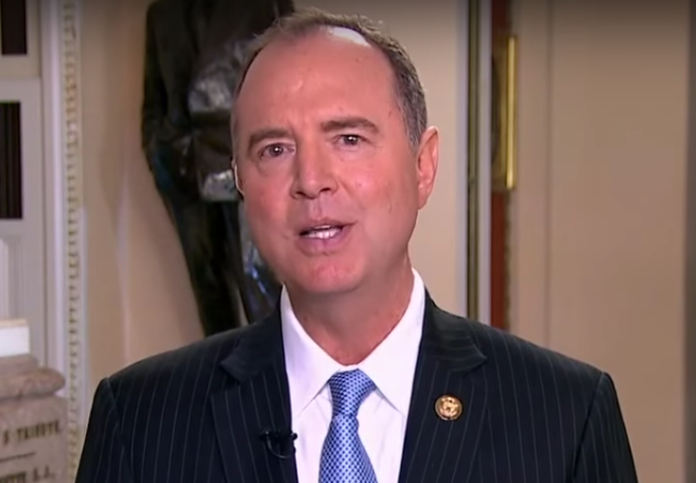 “The View” co-host Meghan McCain has either been ignoring the evidence that President Donald Trump’s campaign colluded with Russia or she just hasn’t had it explained to her slowly enough. Rep. Adam Schiff (D-Calif.) took up the challenge on Thursday.

Former Special Counsel Robert Mueller did find evidence of collusion, he just didn’t find enough to charge Trump with the crime of conspiracy. During a hearing on Wednesday, Mueller told House Intelligence Committee chairman Schiff that there’s evidence of coordination between Trump’s campaign and Russia, which is the definition of collusion.

McCain apparently did not catch that part of the hearing, so she demanded Schiff lay out the evidence of collusion for her on the air.

Again, Mueller and his team found evidence of collusion, just not enough to charge Trump with conspiracy, but the investigation did not address collusion because collusion is not a legal term.

Schiff tried to explain that, but McCain repeated her demand.

“What’s your evidence?” she said. “You’ve been saying that on TV for years.”

“I will tell you, and we have also been saying that the evidence is in plain sight, not hidden anywhere, and we went through that evidence,” he explained. “The Russians offered dirt on Hillary Clinton in writing and sent it to Don Jr., and Don Jr.’s response was in writing and said, as for your offer of foreign illegal help, I would love it. He accepted the offer. They set up a furtherance of that, and they lied about it. You have an offering of illegal help, an acceptance of that, an overt act in furtherance of that conspiracy. That is, I think, by any rational American’s expectation is the personification of collusion.”

Indeed, Trump’s son literally met with Russians for dirt on Hillary Clinton and released the emails in which he discussed the meeting. Trump’s son-in-law Jared Kushner and his then-campaign manager Paul Manafort were also in attendance. It’s a meeting that former Trump official Steve Bannon later characterized as “treasonous.”

“Now Bob Mueller had a different question he needed to analyze, which is, can I prove each of the elements of the crime of conspiracy beyond a reasonable doubt?” Schiff continued. “As you know, well before the Mueller report I was pointing out to the public, there is a difference between what we understand is collusion and whether you can prove all the elements of a crime.”

Knowing she had been schooled, McCain then changed the subject and asked whether the Mueller hearings were a win for Democrats.

“You know, I would consider it a win for the American people that they got to hear from the person who did the investigation,” Schiff replied. “They got to hear unfiltered by anybody else, what he found, you know, for the former director of the FBI, and the special counsel, to say effectively the president acted immorally, unethically, unpatriotically and likely in a criminal fashion, the American people needed to hear. If you are measuring whether this is a success in terms of whether it brings us closer to impeachment or not, that was not my object with wanting him to come in.”

For months, the American people had only heard from Trump and his toady Attorney General William Barr about the contents of the report, portraying it as an exoneration when it did no such thing.

Mueller blew apart Trump’s claims of “no collusion, no obstruction” in a single morning. Yet McCain couldn’t even be bothered to pay attention enough to understand that she has been defending a felon in the White House who constantly insults her family. She’s as pathetic as every Republican lawmaker who spouted conspiracies in defense of Trump yesterday.