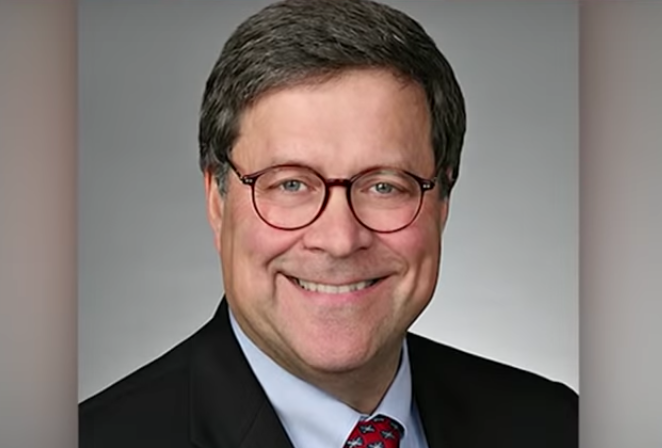 President Donald Trump announced on Friday that he intends to nominate former Attorney General William Barr to once again head the Justice Department, and that could be good or bad for the Russia investigation being conducted by Special Counsel Robert Mueller.

Apparently not satisfied by Acting Attorney General Matthew Whitaker, whom Trump hoped would undermine the probe, he declared his intention to nominate Barr to the position.

Barr served as Attorney General under George H. W. Bush and was easily confirmed in a bipartisan vote.

But it’s not clear the same will be true this time around as Barr has made some remarks about the Russia investigation that seems to indicate he has a bias going into the job. It also doesn’t help that he wants to investigate Hillary Clinton over a conspiracy theory that has been repeatedly debunked.

First, Barr defended Trump’s firing of former FBI Director James Comey by claiming that Trump fired him for stepping out of line.

“Unfortunately, beginning in July, when he announced the outcome of the FBI investigation into Hillary Clinton’s use of a private email server while secretary of state, he crossed a line that is fundamental to the allocation of authority in the Justice Department,” Barr claimed.

Actually, Comey crossed a line by announcing a second investigation of Hillary’s email that October. But that’s not the reason why Trump fired Comey, as he admitted during an interview with NBC’s Lester Holt.

“I was going to fire Comey, knowing there was no good time to do it,” Trump said. “And in fact when I decided to just do it, I said to myself, I said, you know, this Russia thing with Trump and Russia is a made up story.”

Trump would go on to brag about firing Comey to the Russians inside the Oval Office, remarking that doing so took the “pressure” of the probe “off” of him.

Barr has also joined Trump’s criticism that some of Mueller’s prosecutors donated to Democrats, which is irrelevant because Mueller has already demonstrated that will remove investigators who even have a perceived political bias, which is why he removed FBI agent Peter Strzok from the case early last year. It should also be noted that Mueller and Deputy Attorney General Rod Rosenstein are Republicans.

In addition, Barr has already demonstrated that he would rather shift the investigation away from Trump and investigate Hillary Clinton’s role in the Uranium One deal that Trump has repeatedly claimed is worse than anything he has done.

The problem is that Clinton’s involvement in the deal has been thoroughly debunked, even by Fox News anchor Shep Smith.

In short, an investigation into Clinton’s role in the Uranium One deal would be frivolous and a true waste of taxpayer dollars.

Thus far, Barr has been critical of the Russia probe as an outsider who does not know anything about the investigation and the inner workings. Once he understands the investigation as an insider, he’ll likely let it continue, much to Trump’s disappointment. But that’s if Trump’s decision to nominate Barr doesn’t come with pre-arranged strings attached. In order to get support from Senate Democrats and even some Senate Republicans, Barr may be forced to agree that the Mueller investigation should be allowed to conclude naturally instead of prematurely.

William Barr clearly has a bias which will be be raised in the Senate during hearings. The one thing he has going for him is that he served with distinction under a more honorable president and knows that Mueller’s work is impeccable because he supervised him when Mueller served as chief prosecutor for the Department of Justice criminal division.