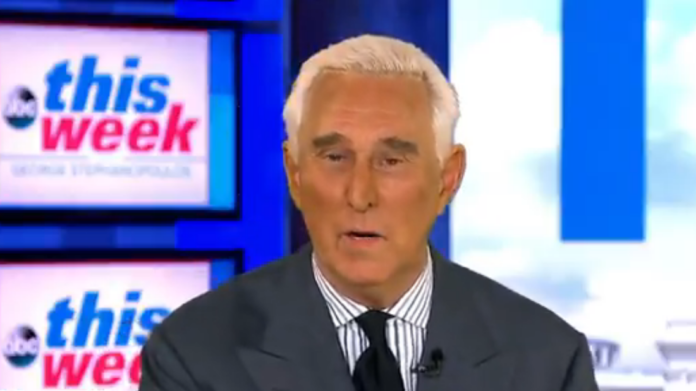 Ever since the investigation being conducted into the 2016 election began, longtime Trump confidant and adviser Roger Stone has steadfastly maintained that he will never agree to cooperate with Special Counsel Robert Mueller, declaring that he’s not a “rat.”

But comments Stone made Sunday during an appearance on “This Week” certainly seem to suggest that Stone has rethought his position on the matter.

Stone, who as indicted Friday on charges of obstruction, lying under oath, and witness tampering, was asked by host George Stephanopoulos:

“That’s a question that I’d have to determine after my attorneys have some discussion. If there’s wrongdoing by other people in the campaign that I know about, which I know of none, but if there is I would certainly testify honestly.”

In the next breath, however, Stone continued to maintain that there was no conspiracy with Russia, saying he would gladly talk to Mueller’s team about conversations he had with President Trump:

“It’s true that we spoke on the phone, but those communications are political in nature, they’re benign. There’s certainly no conspiracy with Russia.”

Did Stone have contact with WikiLeaks founder Julian Assange to coordinate the release of information hacked by Russian operatives? Stone said he didn’t:

“I never discussed these matters with the president. Everything that I did regarding trying to get as much public attention to the WikiLeaks disclosures among voters, among the media, is constitutionally protected free speech. That’s what I engaged in. It’s called politics.”

.@GStephanopoulos: “Have you ever had any conversations with the president during the campaign or since the campaign about Russia or the Mueller investigation?”

Stone also denied that he was angling for a pardon from the president, though in light of the legal jeopardy he faces, it may well be the only option he has if he wants to avoid spending the rest of his life in prison.

If indeed Stone agrees to testify before Mueller’s grand jury and does so honestly to avoid perjury charges, that could spell doom for the president, Donald Trump Jr., and Jared Kushner. Of course, it’s difficult to know when to take Stone seriously because he, much like the president, lies so much that his words have little to no meaning.