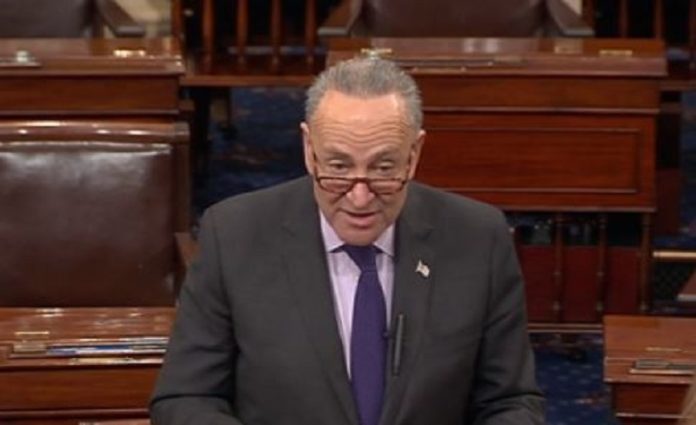 Once again, a tweet from President Donald Trump has gummed up the works. In an attempt to brag about a bi-partisan meeting with House Minority Leader Nancy Pelosi (D-California) and Senate Minority Leader Chuck Schumer (D-New York), Trump tweeted that he didn’t see a deal happening. His overall negativity was evident, turning the proposed meeting into what appeared to be little more than a photo op for Trump to look like he might be attempting to do his job.

Meeting with “Chuck and Nancy” today about keeping government open and working. Problem is they want illegal immigrants flooding into our Country unchecked, are weak on Crime and want to substantially RAISE Taxes. I don’t see a deal!

By displaying his unwillingness even to consider what the Democrats might bring to the table, Trump in effect told them that the meeting would be a waste of their time. Pelosi responded on her own Twitter, stating:

Given that the President doesn’t see a deal between Democrats and the White House, we believe the best path forward is to continue negotiating with our Republican counterparts in Congress instead.

Rather than going to the White House for a show meeting that won’t result in an agreement, we’ve asked @SenateMajLdr & @SpeakerRyan to meet this afternoon. Read my full statement w/ @SenSchumer here: https://t.co/v17WhoEJFU

In their joint statement, Pelosi and Schumer elaborated on their reasoning for leaving Trump out of the equation and meeting instead with Republican leaders in Congress:

If the President, who already said earlier this year that ‘our country needs a good shutdown,’ isn’t interested in addressing the difficult year end agenda, we’ll work with those Republicans who are, as we did in April.  We look forward to continuing to work in good faith, as we have been for the last month, with our Republican colleagues in Congress to do just that.

Schumer has called on Trump to  “stop tweeting and start leading.” Something that hopefully not many people will be holding their breath eagerly anticipating — because it isn’t happening.

In a statement from White House press secretary Sarah Huckabee Sanders, the president obviously feels that he isn’t the one being petty here:

The President’s invitation to the Democrat leaders still stands and he encourages them to put aside their pettiness, stop the political grandstanding, show up and get to work. These issues are too important.

As it stands right now, the government is currently funded until December 8. As that day rapidly approaches, our legislators and the president need to get on the same page and make something happen, or the country will face a shutdown. Being so close to the holiday season, when everyone wants to get home to spend time with their families, we can only hope that they come to some agreement that isn’t devastating for the country.