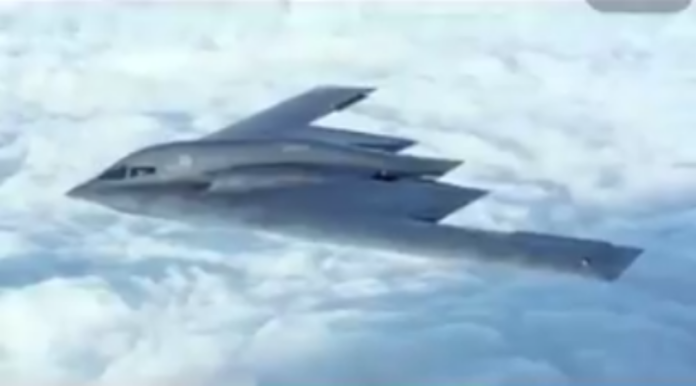 As the Times Square ball was about to drop in New York City on New Year’s Eve, US Strategic Command celebrated by joking about dropping bombs in a disturbing tweet that has since been removed.

It’s perhaps a good time to remind everyone that President Donald Trump has the nuclear launch codes that could blow up the planet and kill us all, but that didn’t stop US Strategic Command from posting this frightening and disgusting tweet Monday night as the world ushered in the New Year.

“#TimesSquare tradition rings in the #NewYear by dropping the big ball…if ever needed, we are #ready to drop something much, much bigger,” the tweet said, followed by a video of a B-2 bomber dropping a bomb that violently explodes and unleashed a giant ball of fire.

After much outrage ensued, US Strategic Command deleted the tweet and apologized:

Our previous NYE tweet was in poor taste & does not reflect our values. We apologize. We are dedicated to the security of America & allies.

In a recently deleted tweet, the US Strategic Command (@US_Stratcom) shared a disturbing New Years message. Referencing the ball drop in Times Square, they said they’re ready to drop something “much, much bigger,” aka a nuclear bomb. They attached video of a bomb drop (See below) pic.twitter.com/mJERD56cgs

Twitter users continued slamming US Strategic Command despite the apology:

– – – It’s getting harder every day to pretend that nuclear war is not in our future – – –
Meanwhile
WHO THE FUCK TWEETED THAT?
Donald Trump?

Chatter about dropping bombs is NOT funny!

Please don’t destroy the world, it’s where I keep all my stuff.

I am assuming the person or people responsible are being removed. This was clearly unsound judgment. I’m sure it impressed @realDonaldTrump, but that is a low bar, indeed. The “commander-in-chief has no control.

Joking about dropping bombs on people is not funny, it’s what eventually leads to actually dropping bombs on people. Regardless of the intention being that our military is working hard to protect us, US Strategic Command could have relayed that message a different way without promoting violence that scares everyone to death at a time when people are struggling to be hopeful.