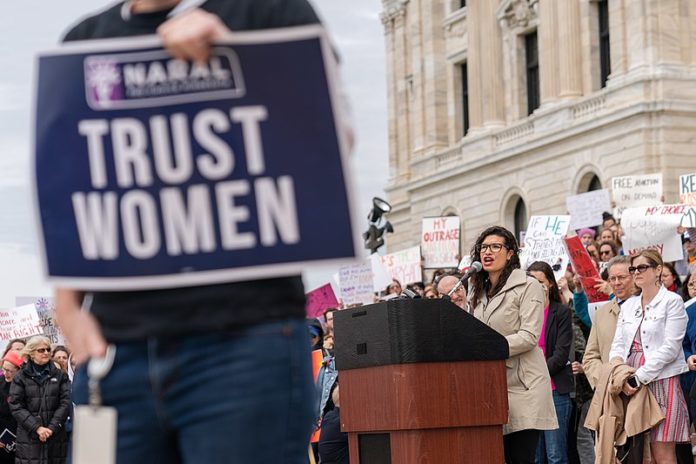 Republicans in several red states think they have the upper-hand against Roe v. Wade and legal abortion. But now that they have passed draconian anti-abortion laws, some women prosecutors are declaring that they’re going to exercise their discretion when it comes to enforcing them.

Male GOP lawmakers seem to have forgotten that prosecutors are the ones who decide whether or not to bring charges against someone. And there are many women who are prosecutors across the country, including states that have passed stringent anti-abortion laws like Alabama, Ohio, Missouri, and Georgia.

In an op-ed for the Washington Post, three female prosecutors told GOP lawmakers where they can stick their new laws and informed them that they intend to resist.

Satana Deberry is a district attorney in North Carolina, and she joined fellow prosecutor Stephanie Morales of Virginia and former federal prosecutor Miriam Aroni Krinsky, who also serves as executive director of Fair and Just Prosecution, in condemning anti-abortion laws and warning how female prosecutors will likely react.

“We are women, mothers of daughters and criminal-justice leaders who collectively have spent nearly 25 years as prosecutors,” they wrote. “From each of these perspectives, we have seen friends, loved ones and victims struggle with the impact of trauma, and we are well aware of the vitally important role that elected prosecutors play in protecting the health and safety of all members of our communities. Today, this shared experience brings us together with deep concerns stemming from recent laws which seek to criminalize personal decisions around abortion, and thereby create untenable health-care choices for women, crime victims, and medical professionals.”

“In the face of laws that are not only unconstitutional but also endanger members of their community and may re-traumatize victims of crime, elected prosecutors have two options: They can courageously lead and make clear that they refuse to use their discretion to criminalize women and health-care providers, or they can sit back in silence and acquiesce in the erosion of fundamental rights of members of their community,” they continued. “We choose the former.”

This represents the strongest backlash against such anti-abortion laws, suggesting that Republicans have clearly overstepped. The women reminded Republicans and their fellow prosecutors that they can resist by using their discretion to decline charging women for violating an unconstitutional law.

“Some may argue it is a prosecutor’s obligation to prosecute all laws and that only legislators are charged with making these ‘policy’ decisions,” they wrote. “We don’t see the role of prosecutors elected by their communities through this narrow lens. With thousands of laws on the books, elected prosecutors use their discretion every day in deciding how to wisely and justly allocate resources to promote enforcement of laws that will have the greatest effect on advancing public safety. To do so, they necessarily decline to prosecute certain laws — such as those that criminalize substance-use disorder or adultery — which do not serve the interests of justice.”

“There are many ways prosecutors can use the rule of law to make communities safer and healthier — but trampling upon decades-old legal precedent to put women and doctors in jail for seeking or performing a legal medical procedure is simply not one of them,” they concluded. “Prosecutors must use their voices and, more importantly, their discretion to ensure these laws do not infringe upon the fundamental rights of members of their communities.”

Women are understandably pissed at Republicans for trying to legislate their bodies. Women are getting more involved in political and legal professions, giving them the power to ignore laws the GOP passes to oppress them.

In short, to paraphrase a quote by former President Andrew Jackson, Republicans have made their laws, now let them enforce them. Something tells me they are not going to like how this turns out.