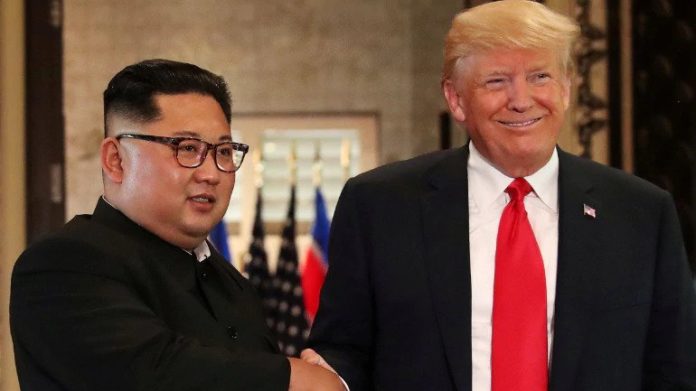 On Sunday, President Donald Trump couldn’t resist bragging about his upcoming summit with North Korean president Kim Jong Un, which is scheduled for February. But as usual, Trump had to complain that the media wasn’t giving the summit enough attention:

The Media is not giving us credit for the tremendous progress we have made with North Korea. Think of where we were at the end of the Obama Administration compared to now. Great meeting this week with top Reps. Looking forward to meeting with Chairman Kim at end of February!

But as we learned again today, Trump’s claims of “tremendous progress” are undercut by a new report suggesting that North Korea has 19 additional missile sites it failed to disclose to American officials. NBC News reports:

“With a second U.S.-North Korea nuclear summit looming in February, researchers have discovered a secret ballistic missile base in North Korea — one of as many as 20 undisclosed missile sites in the country, according to the researchers’ new report.

“The Kim regime has never disclosed the existence of the Sino-ri Missile Operating Base to the outside world. Ballistic missiles are the primary delivery mechanism for North Korean nuclear warheads.”

Beyond Parallel, a project sponsored by the Center for Strategic and International Studies (CSIS), a defense think tank, was the first to report on the previously undisclosed missile sites, and one of the authors of the startling new report, Victor Cha, said North Korea has again been caught withholding information from the United States and international community:

“The North Koreans are not going to negotiate over things they don’t disclose. It looks like they’re playing a game. They’re still going to have all this operational capability.”

Cha also noted that Kim just left for a meeting with Chinese officials in Beijing, just as he did before he met Trump in Singapore back in 2018:

“This happened last time, too. Kim Jong Un has more leverage in the meeting if he’s just met with Chinese. The Chinese want to make sure that they see Kim before he has another meeting with the U.S. too.”

And a former senior U.S. official warned that members of the administration and and American allies are terrified that Trump will give away the store to Kim and not get anything tangible in return:

Most of all, the North Koreans want an end to the crippling sanctions imposed by the international community. Officials with the North Korean government have reportedly told Secretary of State Mike Pompeo that they want immediate sanctions relief and eventually a declaration from the U.S. stating that the war between the two nations has ended.