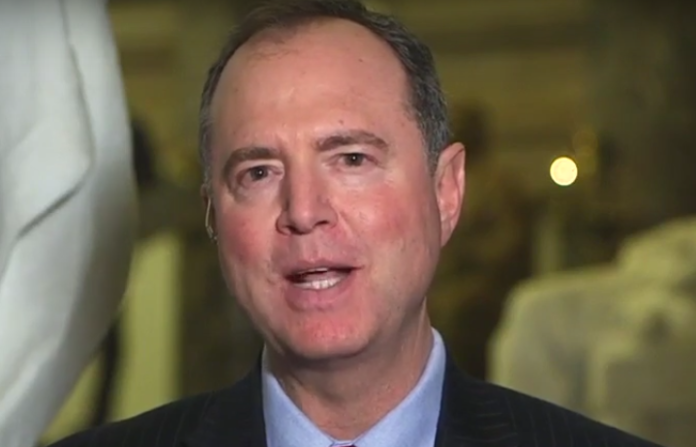 Soon-to-be House Judiciary Committee Chairman Rep. Adam Schiff (D-Calif.) pointed out on Wednesday that the deck of witnesses and evidence is stacking up against President Donald Trump, especially after the revelation that the National Enquirer flipped on him to corroborate Michael Cohen’s testimony.

Cohen was sentenced to three years in prison for committing campaign finance felonies at Trump’s direction during the 2016 Election, and the Enquirer helped bury the stories of Stormy Daniels and Karen McDougal, both of whom had affairs with Trump, so that they could not hurt the campaign down the final stretch of the campaign.

This is also illegal, but the parent company of National Enquirer, AMI, reached a plea deal this week that puts Trump in even worse trouble because it hurts his argument that the transaction was personal and not politically motivated. That’s been blown out of the water now.

“How do you think the president will be held accountable?” CNN host Wolf Blitzer asked Schiff on Wednesday night.

“I think the more significant development in the case today than the sentence that Michael Cohen received was the fact that there is this nonprosecution agreement with AMI, the parent of the National Enquirer,” Schiff replied. “Because what that means is, this is not simply Michael Cohen’s word against Donald Trump’s, it is now Donald Trump’s word against everyone else. There are witnesses at AMI who will testify that these payments were made for the express purpose of influencing the election, by depriving voters of knowledge of these stories of women coming forward to say they had affairs with a candidate running for president.”

Indeed, Trump has no defense anymore to explain away these illegal transactions. Even the judge who sentenced Cohen agrees that Trump committed a crime.

So do legal experts, who posted about the bombshell revelation on Twitter.

This is very bad news for Trump and his associates, because now Cohen *and* the Enquirer admitted that the purpose of the hush money payments was to impact the election, a key fact that prosecutors need to prove. https://t.co/AFKz3SGlKI

Friends, here are the most important words: “…it’s agreement to provide cooperation in the future.” That means against the Trump Org, the campaign or the man himself. Prosecutors don’t just let offenders walk for fun—ya gotta go up the food chain to get a deal like this. https://t.co/orEvosoN4b

This is quite important. One by one, the career DOJ prosecutors are removing possible Trump defenses. Now it isn’t just Cohen, but also AMI, saying these hush money payments were made to influence the 2016 Presidential election, and knock out the so-called “Edwards defense” https://t.co/FzH7pRYAPP

In short, Trump is screwed just because of the campaign finance felonies. And if Special Counsel Robert Mueller reports that Trump colluded with Russia to win the 2016 Election and committed obstruction of justice, he’ll be in even deeper trouble to the point where Republicans would have no choice but to impeach him. Of course, seeing as how not impeaching Trump right now for committing felonies signals that Republicans intend to go down with the ship, the American people will have to punish them in 2020 and put lawmakers in charge who will do their constitutional duty by holding Trump fully accountable.