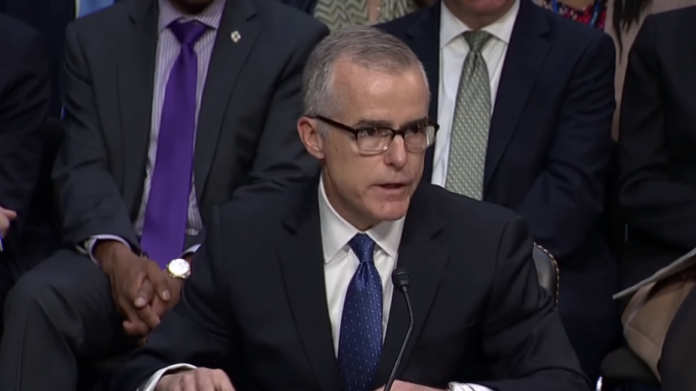 A little more than a week ago, with just one day to go before he was eligible to retire and collect his pension, Andrew McCabe, the former deputy director of the FBI, was fired by Attorney General Jeff Sessions. While Sessions claimed the McCabe’s dismissal was due to a report from the Inspector General of the Department of Justice, many saw the act as an attempt to discredit McCabe, who is a close friend of former FBI chief James Comey.

McCabe is now speaking out, excoriating the Trump administration in an op-ed he wrote for the Washington Post.

When he let McCabe go, Sessions said one reason he had done so was a “lack of candor” on McCabe’s part. And McCabe directly addresses that charge in his response, noting:

“I have been accused of ‘lack of candor.’ That is not true. I did not knowingly mislead or lie to investigators. When asked about contacts with a reporter that were fully within my power to authorize as deputy director, and amid the chaos that surrounded me, I answered questions as completely and accurately as I could. And when I realized that some of my answers were not fully accurate or may have been misunderstood, I took the initiative to correct them. At worst, I was not clear in my responses, and because of what was going on around me may well have been confused and distracted — and for that I take full responsibility. But that is not a lack of candor. And under no circumstances could it ever serve as the basis for the very public and extended humiliation of my family and me that the administration, and the president personally, have engaged in over the past year.”

“I woke to find the president of the United States celebrating my punishment: ‘Andrew McCabe FIRED, a great day for the hard working men and women of the FBI — A great day for Democracy.’ I was sad, but not surprised, to see that such unhinged public attacks on me would continue into my life after my service to the FBI. President Trump’s cruelty reminded me of the days immediately following the firing of James B. Comey, as the White House desperately tried to push the falsehood that people in the FBI were celebrating the loss of our director. The president’s comments about me were equally hurtful and false, which shows that he has no idea how FBI people feel about their leaders.”

Sessions and Trump probably think they’ve accomplished something by what they did to Andrew McCabe. But McCabe is even more dangerous to them now. Yet again, Trump has overplayed his hand, and he will now have to sit back and watch as the consequences of his actions come back to haunt him.