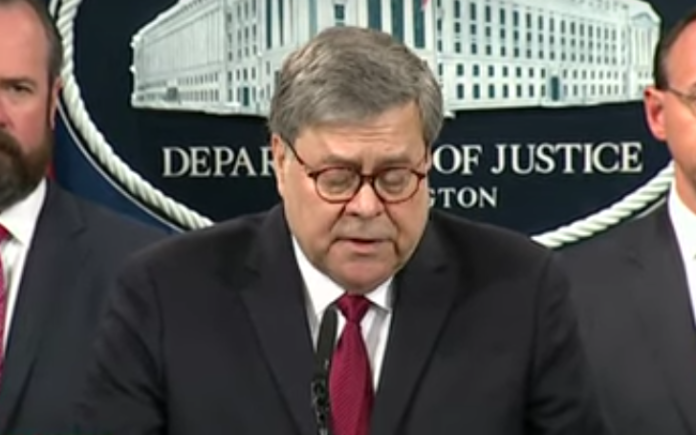 Ten. That’s the number of times the Mueller report says President Donald Trump may have committed obstruction of justice. Yet, Attorney General William Barr repeatedly made excuses for Trump’s actions as he announced the bombshell revelation.

On Wednesday, Barr announced that he would be holding a press conference prior to releasing a lightly redacted Mueller report to Congress, which resulted in immediate backlash because it appears Barr is seeking to spin the report to protect Trump and control the media narrative.

During the press conference, that’s exactly what Barr did as he revealed that the report “recounts ten episodes involving the president and discusses potential legal theories for connecting those activities to the elements of an obstruction offense.”

Potential episodes may include Trump’s firing of former FBI Director James Comey, an action Trump openly bragged “takes the pressure off” regarding the Russia investigation. Trump also tried to cover up for his son Don Jr. over the Trump Tower meeting with Russian agents in 2016. In addition, Trump also floated pardons to influence witnesses and pressured former Attorney General Jeff Sessions to unrecuse himself.

Even some of Trump’s tweets could be interpreted as potential obstruction.

But rather than let the evidence speak for itself, Barr interjected his opinion, an opinion that he had already formed a year before he even saw this report when he auditioned for his current position by claiming it’s impossible for the president to obstruct justice.

Chris Wallace on Fox news said this after the conference:

Barr excused Trump’s behavior by chalking it up to his frustration and paranoia.

“There is substantial evidence to show that the president was frustrated … by his sincere belief that the investigation was undermining his presidency … and fueled by illegal leaks,” Barr claimed

“The president took no act that in fact deprived the special counsel of the documents and witnesses necessary to complete his investigation,” Barr concluded. “The evidence of non-corrupt motives weighs heavily against any allegation that the president had a corrupt intent to obstruct the investigation.”

It is now more imperative that Special Counsel Robert Mueller testifies before Congress about the report. Barr’s conclusion that Trump only behaved the way he did out of frustration is unacceptable. It’s like clearing a man of murder because he was angry before he committed the crime. Trump admitted on tape that he fired Comey because of the Russia investigation and proceeded to brag to Russian officials that he did it to take pressure of the probe off himself.

Frustration is no excuse for interfering with an investigation for two years and Barr is only embarrassing himself by using this flimsy defense of his sycophantic conclusion.