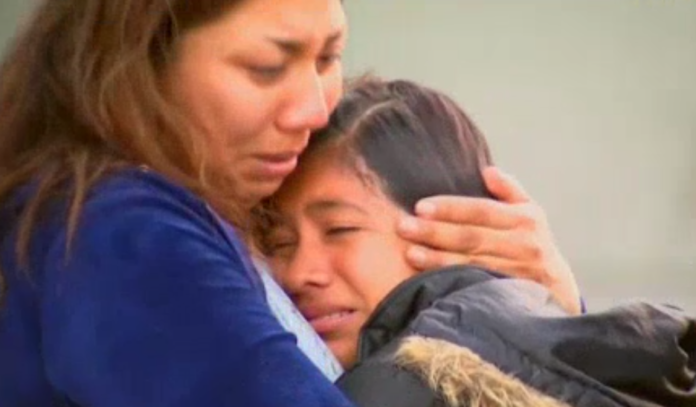 Another day, another incident involving Border Patrol terrorizing children at the southern border. Only this time, the children are American citizens.

Nine-year-old Julia Isabel Amparo Medina and her 14-year-old brother Oscar attend school in the San Diego area, but have to enter the country using passports because they are American citizens who live in Tijuana, Mexico.

They’ve previously had no problem with Border Patrol before, but their trip to school earlier this week became an absolute nightmare.

A family friend drove the children to school but encountered a line at the border so long that they would have been late, which is why the children walked to the border with passports at the ready. Once across, an Uber would pick them up and complete the journey.

Instead, Border Patrol threatened Oscar with jail and accused him of human trafficking in order to force him to sign a document saying that his sister is actually his cousin. Agents even used Julia’s mom against her by claiming she could see her mom if she just admitted to being the cousin in question. Because Border Patrol is apparently so inept they can’t tell the difference between one little girl’s photo and another’s. They literally accused Julia of having a forged passport. Seriously, are Border Patrol agents not trained to spot fakes?

Also, forcing children to sign confessions or admit wrongdoing without an attorney or legal guardian violates their rights and is a blatant abuse of power that should get the agents responsible fired.

“My daughter told her brother that the officer told her that if she admitted that she was her cousin, she would be released soon so she could see her mom,” the children’s mother Thelma Galaxia told NBC 7. “He was told that he would be taken to jail and they were going to charge him for human trafficking and sex trafficking.”

And so, Julia was detained by Border Patrol and placed in a holding facility for over 24 hours, including overnight.

“I was scared,” Julia said. “I was sad because I didn’t have my mom or my brother. I was completely by myself.”

Needless to say, Julia did not sleep well. She was too terrified of the jack-booted thugs who often kidnap children at the border and put them in cages.

Galaxia had to call the Mexican consulate for help, and Julia was soon reunited with her family. But this is a scar that will stay with Julia and her brother for the rest of their lives.

Here’s the video via NBC 7.

In response to questions from the media, Customs and Border Patrol released a statement in a desperate effort to excuse their unacceptable error and behavior.

“The younger child provided inconsistent information during her inspection, and CBP officers took the 9-year-old into custody to perform due diligence in confirming her identity and citizenship,” a CBP spokesperson told Teen Vogue. “CBP officers confirmed that the teenager was a U.S. citizen and he was permitted to enter the U.S. At about 6:30 PM on Tuesday, after confirming her identity and that she was a U.S. citizen, the girl was admitted to the United States and released to her mother.”

“CBP prioritizes the safety of the minors we encounter,” the statement continued. “It’s important that CBP officials positively confirm the identity of a child traveling without a parent or legal guardian. Some specifics of our techniques for determining the true identity of a person crossing the border are law enforcement sensitive information. In addition, some details of this case are restricted from release due to privacy concerns.”

Border Patrol’s “techniques” clearly need to be reviewed and improved. Because treating any child like a criminal is unacceptable, especially since the same children have been crossing the border using the same passports for several years without incident. America doesn’t need to wall, we need better Border Patrol agents.