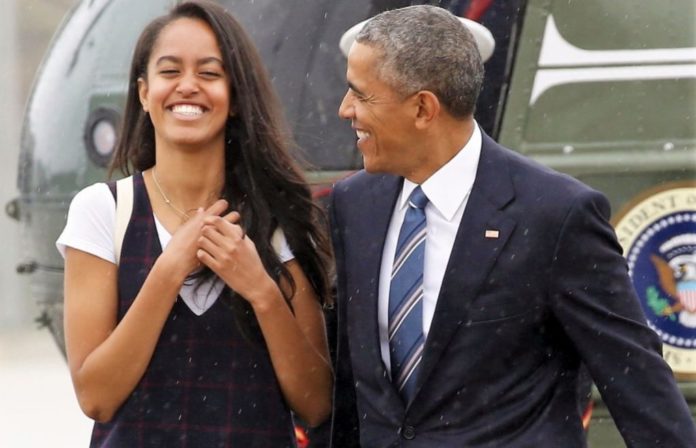 The pictures of Malia, who is a young adult and college student, were used to try to trash her and her parents. Internet trolls made vile racist comments calling Malia a “baboon” and a “monkey.”

Malia Obama’s private life, as a young woman, a college student, a private citizen, should not be your clickbait. Be better.

Malia Obama should be allowed the same privacy as her school aged peers. She is a young adult and private citizen, and should be OFF limits.

After the pictures were posted the right-wing blog, the Daily Caller was flooded with racist comments.

One racist troll responded to Ivanka Trump’s support of Malia by saying, “She looks like a baboon when she blows smoke rings.”

Another responded to a post that said “Leave Malia Obama alone” by saying, “the obamanable Malia is fair game like any other monkey, besides she does a good job at earning the criticism she been gettin.”

Another responded to that same tweet saying, “Not only No but Hell NO ….. With or without our help one or both will end up behind bars from bad Parenting and Obama has no one to blame but the parents.”

While the racist trolls came out of the woodwork to spew their vile hatred all over twitter, still more came forward to support Malia Obama. Many tweeted some version of “Leave Malia alone.” Others pointed to the hypocrisy on the right, like this Twitter user who said,

SOME CONSERVATIVES: Malia Obama is a smoker what a disgrace to our embattled nation

Many responded pointing out the fact that the pictures showed nothing more then Malia behaving like a typical college student,

Nothing out of the norm about Malia Obama acting like a normal college student.

What is ABSOLUTELY ABNORMAL: trash mag photogs following this kid around with a zoom lense camera.

Others pointed out the “friends” who were willing to sell Malia out to the tabloids saying things like,

Still, others pointed out the misplaced outrage over Malia Obama behaving in a perfectly legal manner while the country faces many far more pressing issues,

BREAKING: Malia Obama is in college and is acting like it.

– Donald Trump is terrible at his job.

While many bigotted, racist, ugly trolls were thrilled with the opportunity to trash Malia Obama, the outpouring of love and support trumped the hate.