The United States Blues
Home News Chris Wallace Calls Out Huckabee Sanders To Her Face For Lying About... 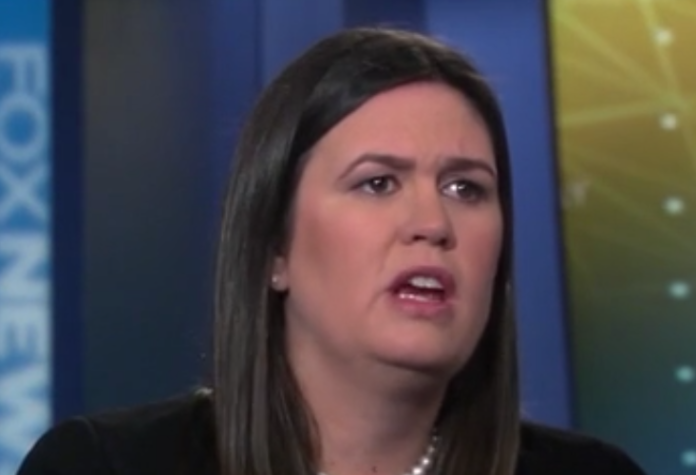 As the government shutdown drags into its third week and threatens to hurt even more people if it drags into February or longer, Wallace wanted to know why Trump is so obsessed with a wall that he’s willingly hurting the country with a shutdown.

“The president’s not fighting for the wall,” Huckabee Sanders said. “He’s fighting for the protection of American citizens. He wants the wall and a number of other things. We have a completely broken immigration system. We have a national crisis, not just safety and security, but a humanitarian crisis. We have drugs. We have human traffickers. We have terrorists that come across our border, and there has to be a stop to that.”

The problem is that a wall won’t stop drugs because most of them cross the border through legal ports of entry. It should also be pointed out that studies show undocumented immigrants commit crime at a lower rate than natural born citizens.

And the humanitarian crisis was created by Trump himself due to policies he instituted forcing the separation of families at the border and the fact that he has made processing asylum claims slower by not providing enough manpower to Border Patrol. So far, two children have died in Border Patrol Custody in the last two months while none died in the entire eight years that Barack Obama served in office.

Wallace then played footage of Homeland Security Secretary Kirstjen Nielsen talking about those caught at the border, many of whom are fleeing nations with known terrorism.

“We know that roughly 4,000 known suspected terrorists come into our country illegally and we know that our most vulnerable point of entry is at our southern border,” Huckabee Sanders responded, prompting Wallace to stop her in her tracks to call her out for lying.

“Wait, wait, wait,” Wallace said. “I know this statistic. I didn’t know you were going to use it, but I studied up on this. Do you know where those 4,000 people — where they are captured? Airports!”

“The State Department says there hasn’t been any terrorists that they’ve found coming across the southern border,” Wallace continued.

Trump’s mouthpiece continued insisting that the southern border “is the most vulnerable point of entry that we have,” but Wallace stuck to the facts.

“But they’re not coming across the southern border, Sarah!”

According to NBC News, “the figure she seems to be citing is based on 2017 data, not 2018, and refers to stops made by Department of Homeland Security across the globe, mainly at airports.”

It’s pretty clear that terrorists are trying to enter the country by alternative routes and means rather than try to cross the southern border. If the border is “tight,” a wall is unnecessary.

Once again, Huckabee Sanders gets caught in a lie trying to use fear of terrorism to push for a wall that won’t stop drugs nor illegal immigration, and on Fox News no less.