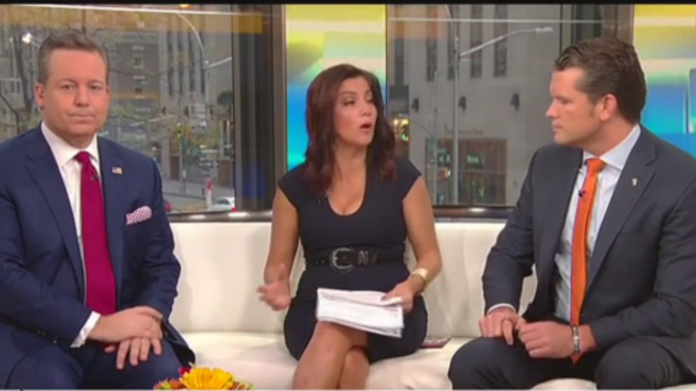 Despite the fact that the suspect in the horrific shooting at a Pittsburgh-area synagogue on Saturday that killed 11 was an avowed right-wing anti-Semite who told police he wanted to kill all Jews, a Fox News host said Sunday morning that anti-Semites on the left are to blame for hate crimes.

“Fox & Friends’ co-host Rachel Campos-Duffy suggested that despite his hateful rhetoric and constant verbal cheap shots aimed at his opponents, President Donald Trump is actually trying to unify the nation with his attacks on professional athletes who kneel during the playing of the national anthem:

“What struck me is something that we could all come around is the fact that we’re all Americans. And one of the things I think President Trump has been very good about is really supporting our flag, uniting us around our patriotism, help up being proud about being Americans.

Whining about African-American athletes who exercise their First Amendment right of peaceful protest is going to unite us, Rachel? Really? What rock have you been living under for the past two years?

But Campos-Duffy was far from finished proving just how utterly clueless she and so many of the talking heads at Fox are when it comes to the issues that confront this country, saying “the left” is to blame for anti-Semitism:

“There is a rise in anti-Semitism. And it’s happening in Europe. That’s something that hasn’t been talked a lot about because it doesn’t fit the narrative of the neo-Nazis that we see here, that fringe group here in America.

“And it’s infecting our universities. There is a very virulent anti-Semitism from the left. So if we’re going to have the conversation about the rise in anti-Semitism, we need to talk about where it’s being mainstreamed, which is in our universities and some of the fringe of the progressive side.”

Rachel, here’s the facts, not that you’ll be able to comprehend them:

Just when you thought Trump TV couldn’t possibly get any lower, they try to blame others for their own blatant hatred and prove they haven’t yet reached the bottom when it comes to disgusting.