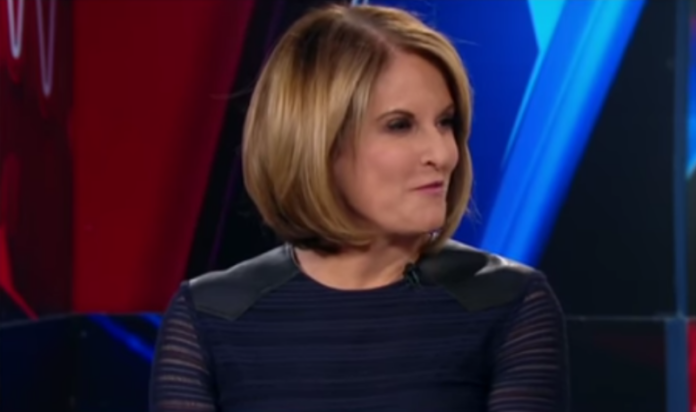 President Donald Trump knows that his Republican Party is getting crushed by women because they’re sick and tired of his attacks against them, and that’s why he is only now trying to pretend that he’s changing his tone, according to CNN analyst Gloria Borger.

During a rally on Monday, Trump refrained from talking about his daughter Ivanka’s appearance and claimed that he wants to use a “softer tone.” He also used White House counselor Kellyanne Conway and White House Press Secretary Sarah Huckabee Sanders as props in order to claim that he supports women.

It was an apparent desperation play to convince women to vote Republican.

Borger told CNN anchor Anderson Cooper later on in the evening that it appears Trump understands that women are abandoning the GOP in droves and that his effort at the rally was merely a last-minute ploy to fool them into changing their minds.

“What do you make of President Trump bringing out Kellyanne Conway, bringing out Sarah Huckabee Sanders?” Cooper asked. “Also saying, talking about tone, which is something he talked about a lot during the campaign, saying that when he became president he would change his tone. Maybe this was like a one-off in some local affiliate interview, but it’s interesting that he’s talking about, oh, it’s kind of my regret.”

“Gee, do you think it could be about women?” Borger replied. “I mean, I’m just sort of thinking here that, he brings out all these women onstage, talks about his daughter, talks about his tone. Could it be about that women favor Democrats by about two to one now, and he understands that this is going to be a problem for him, particularly in the House?”

Indeed, women favor Democrats 62% to 35% going into Election Day according to a CNN poll.

“The gender gap cuts across lines of race and education, with non-white women (79% favor Democrats) and white women with college degrees (68% back the Democrat) breaking most heavily for the Democrats,” CNN reports.

“And you know that he’s usually not really reflective about these kind of things, so I thought it was actually quite surprising that he said that,” Borger continued. “But the fact that he is saying it leads me to believe that he really understands that women are just, you know, deserting the Republican Party in droves.”

But Borger doesn’t think Trump will actually change anything.

“I think he wanted to sound like he was,” she concluded.

.@GloriaBorger: President Trump is beginning to understand that “women are just deserting the Republican Party in droves,” in part due to his rhetoric. https://t.co/AQVa7PSVV2 pic.twitter.com/hu5g0lVkah

Clearly, Trump’s treatment of women over the last two years and his extreme rhetoric is backfiring. Only it’s the rest of the GOP that will suffer for it since Trump is not on the ballot.

But in way, he is. This Election Day could see Americans soundly reject his agenda and his behavior in a way that should terrify him and the Republican Party ahead of the 2020 presidential election. Republicans cannot rely on male voters forever, especially since they are capturing 49 percent of that voting block. At some point, they will need to appeal to female voters, and that will be impossible as long as Trump denigrates them.