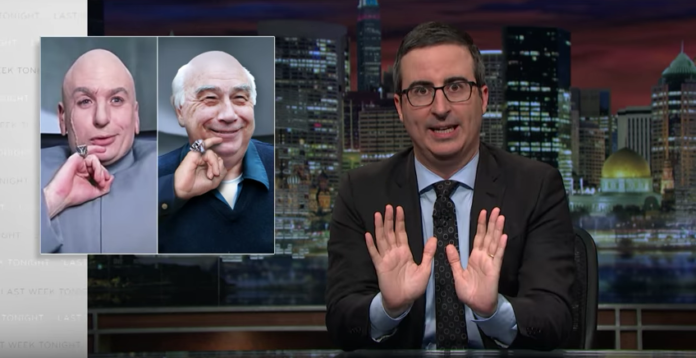 Last summer, Oliver repeatedly mocked Murray for sending his show a “cease and desist” letter threatening to sue the comedian if he made fun of him on the air.

Oliver, who understands the First Amendment, proceeded to mock the “Geriatric Doctor Evil” and his company practices.

Murray repeatedly blamed former President Barack Obama for the disappearance of coal jobs, but as Oliver pointed out, coal has been on the decline for decades. Many jobs have been lost because of automation and the switch to clean energy and cheaper natural gas prices. Murray also claimed to care about worker safety, but Oliver noted that Murray fought to block a rule reducing exposure to coal dust, which causes black lung, a disease that killed thousands of miners.

In fact, Murray made mining so unsafe that some of his employees even returned their bonus checks with phrases such as “Eat sh*t Bob” and “Kiss my ass Bob” written on them.

Murray also didn’t want Oliver to talk about a tragic mining collapse in Utah, but he did anyway, pointing out that Murray blamed the disaster on an imaginary earthquake instead of the unauthorized mining practices Murray forced his miners to employ and that he would yell at the families of the victims for asking questions about their loved ones.

In the end, Oliver predicted that Murray would probably sue but stands by everything he said, even going so far as to offer Murray a check with “Eat sh*t, Bob” on it.

Murray didn’t accept the ruling, however, and sent an angry letter to Cramer begging him to reconsider because his employees are supposedly being harmed by it.

Cramer not only didn’t buy it, he warned Murray and his lawyers not to send any more letters or face sanctions.

You can read both letters here.

“Other than the fact that Bob Murray’s case against John Oliver is a ridiculous attempt to quell speech by abusing our legal system, it really is the gift that keeps on giving. With the disdain Mr. Murray has shown for our constitution and our legal system, I’m not surprised that he would also improperly try to influence a judge in this way (or with such a hilarious letter). Unfortunately for Bob, everything John Oliver has said on his show was and continues to be protected speech. It is, in fact, legal for anyone to say, ‘Consume defecation, Bob.’”

Of course, Murray is a friend of President Donald Trump, who hasn’t been a friend to coal miners at all despite making promises to help them during the campaign.

While both Murray and Trump share a disdain for the First Amendment, Oliver was well within his rights to mock Murray, especially since he didn’t really say anything false about him.

If Murray wants to blame someone for his bad image, he should look in the mirror.