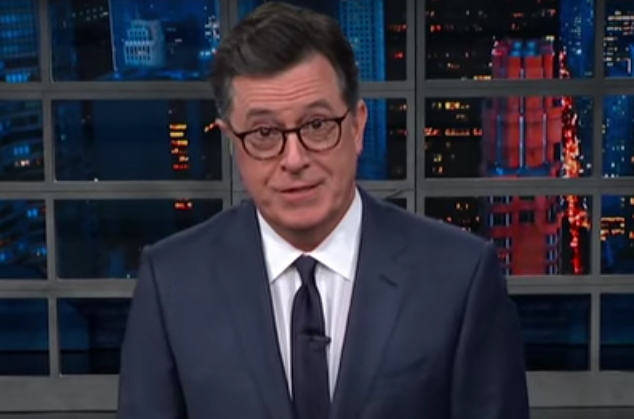 President Donald Trump’s decision to cancel a Christmas party for journalists at the White House after decades of tradition got the attention of “Late Show” host Stephen Colbert, who ripped Trump a new one for being a hypocrite and a real life Grinch.

Despite claiming to be a defender of Christmas, Trump demonstrated earlier this week that there’s a real war on Christmas, except he’s the one waging it by canceling the annual White House Christmas party for members of the press, a move that goes against the Christmas spirit.

Trump made no formal announcement, but quietly canceled the event, which many journalists were planning to skip in protest of Trump’s treatment of the press this year, which included banning a journalist from the White House using frivolous accusations and referring to the press repeatedly as the “enemy of the people” and “fake news.”

Colbert addressed Trump’s scrooge attitude on Friday night, and he really lit him up like a Christmas tree.

“Sadly, some people aren’t having a holly jolly Christmas,” Colbert said after noting that the holiday is right around the corner. “The White House Press Corps, because Donald Trump has canceled the White House Christmas party for the press.”

As the audience booed Trump, Colbert reminded them that Trump is the same guy who claimed to be a champion for Christmas during the 2016 campaign. But here he is canceling a festive Christmas party that is steeped in tradition.

“The press really looks forward to it,” Colbert continued. “The Fox News people really love kissing Trump’s a** under the mistletoe.”

“In the past, people got tor roam the decorated mansion with a spouse or family member, but this year they risk getting lost in the forest of blood trees,” he said, referencing First Lady Melania’s Trump’s tasteless decision to put up red Christmas trees that have been heavily mocked on social media.

And it turns out that Trump is terrible at giving gifts because his son Donald Trump Jr. has admitted that his dad re-gifts presents to him “because they have the same initials.”

TONIGHT: You’re a mean one, Mr. Trump. The president cancels the White House Christmas party for the press. #LSSC pic.twitter.com/unkpLGHH6h

Trump could easily show some Christmas cheer by keeping the party, but his hatred for the press runs so deep that even Christmas can’t make his cold dead heart beat even a little bit.