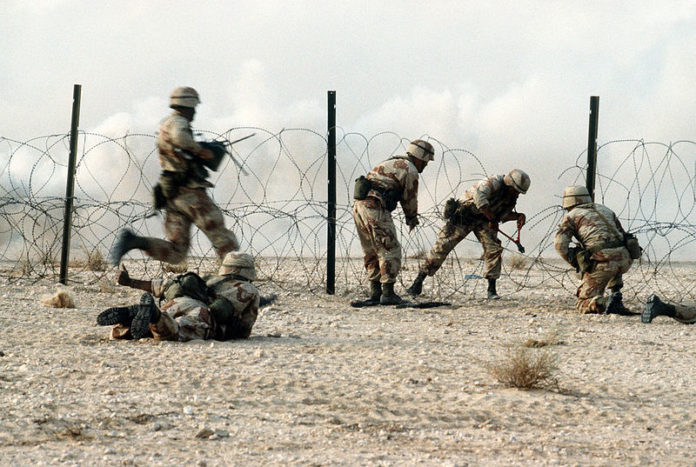 President Donald Trump has not visited American troops serving inside a war zone since taking office nearly two years ago, and his excuses for not doing so are damaging military morale says conservative columnist Noah Rothman.

Trump’s utter disrespect for the troops has been on display more than ever since before Election Day.

In October, Trump claimed he hasn’t visited troops in war zones because he’s “too busy,” even though he has managed to play hundreds of rounds of golf at his own resorts in the last two years and held hundreds of unnecessary campaign rallies all while taking time to get on Twitter and watch hours of television every day.

Clearly, Trump’s schedule could accommodate a trip to see our soldiers overseas in the places we have sent them to fight and risk their lives for the last 20 years.

His lame excuse got even more pathetic when he canceled an appearance at two Veteran’s Day events, one in France to honor Americans who died during World War I and the other in Arlington Nation Cemetery to honor all Americans who have made the ultimate sacrifice for our country. And he canceled because it was raining.

Now Trump is offering another pathetic reason why he doesn’t want to visit the troops.

“One reason he has not visited troops in war zones, according to his aides, is that he does not really want American troops there in the first place. To visit, they said, would validate missions he does not truly believe in.”

Seriously. Trump does not want to visit troops because he doesn’t believe in or support their missions.

That’s one hell of a way to destroy troop morale.

It’s one thing to oppose the conflicts we are fighting. It’s another to not support the troops, something Trump has frequently whined about NFL players not doing when they kneel during the national anthem. But here’s Trump literally not supporting the troops. Republicans should be horrified. In fact, every conservative who claims to love the troops should be ashamed of Trump.

MSNBC conservative guest Noah Rothman sure is ashamed of him, which is why he took Trump to the woodshed on Monday morning.

“I can’t think of a sentiment that’s more deleterious to morale in those conflicts than the idea that the commander-in-chief doesn’t back them,” Rothman said.

Rothman then pointed out that Trump can bring many of our troops home if he doesn’t support their missions. After all, our exit from Afghanistan is long overdue.

“It’s a dereliction of his responsibility, it’s a craven thing to say, doesn’t make any sense, frankly, because the president can do whatever he wants to do, he can pull these troops back if he was so inclined,” he said. “He has not been inclined because it would be strategically disastrous, and he has been thankfully convinced of the strategic foolishness of pursuing a policy that he campaigned on.”

The bottom line is that just as Trump displayed cowardice by dodging the draft five times during the Vietnam War, he is still a coward now even though he has the best protection force in the world to keep him safe in a war zone should he chose to go. Our troops don’t have the kind of protection in war zones that Trump would get.

Our troops serving in war zones should be able to see the president actively in their corner. Unfortunately, we have a president who only cares about himself and his own well-being. Once a coward, always a coward. And Republicans should never claim that they love and support our military ever again.