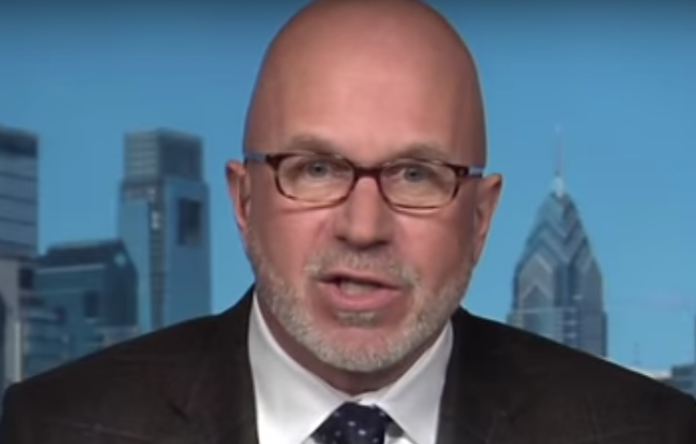 CNN and conservative host Michael Smerconish are both under fire after the latter came to the defense of right-wing billionaire New England Patriots owner Robert Kraft on Sunday.

Kraft faces solicitation charges in Florida after being arrested during a prostitution and human trafficking sting earlier this week.

Kraft was charged with two counts of soliciting prostitution in connection with a Florida spa tied to an international human trafficking ring, police said Friday.

The NFL owner was charged with paying for sexual services at Orchids of Asia Day Spa in Jupiter.

The spa was among 10 shut down in the Orlando area, Palm Beach County and the Treasure Coast after a several-month investigation revealed women there were in “sexual servitude,” according to arrest records.

On Saturday, Smerconish jumped to Kraft’s defense by claiming that he doesn’t deserve to be shamed after the New York Daily News put Kraft’s picture on the cover and called him an “American sleaze.”

Does 77 year old Bob Kraft deserve this for misdemeanor arrest? I’ll argue “no” @cnn 9am pic.twitter.com/eHFCVNqLRl

Smerconish also called Kraft’s arrest a “waste” of police resources as if old white rich men should be let off the hook for committing crimes.

Yes, Kraft does deserve to be shamed. He also deserves to be punished under the law. And this comes from a Patriots fan. For 18 years, Kraft has demanded the highest moral and professional standards from the team he owns. It’s been a matter of personal pride for him over the years. He should be held to the same standard. Kraft does deserve sympathy for the death of his wife in 2011, but he has since moved on and is involved with a woman 39 years younger than himself. In fact, he didn’t wait very long after his wife died to get involved with actress Ricki Noel Lander, whom he began seeing in 2012.

So, it’s not like he didn’t have options. If he wasn’t happy with his relationship he could have broken things off and pursued another woman. He didn’t have to ruin his reputation by soliciting sex in a Florida spa connected to human trafficking and sex slavery.

Yet, that’s exactly what Kraft did, and Twitter users bashed Smerconish for daring to defend him.

He willfully participated in a human trafficking conspiracy. Was he unaware his victims couldn’t speak English and didn’t have a choice in what they did? Come on.

The Daily News was too kind.

hey, remember when migrant babies were kidnapped into concentration camps and the Deplorables all screamed THEY BROKE THE LAW as a justification? those were good times, weren’t they? proportional punishment for me, not for thee

Imagine wanting someone to avoid punishment because they’re wealthy, white and old

How come, with all his money, he couldn’t find a free woman who’d give him a happy ending? Dig deeper, @smerconish. Why did he (and the two other enormously rich guys) go to a strip mall “spa” for sex? There’s some dark stuff here behind it, torture or snuff films maybe.

The women were held against their will and required to have sex 24/7, 365 days a week. This old rich man is a criminal.

Smerconish (Who I absolutely almost always agree with) said this morning that this was a waste of Law Enforcement resources. Do any of these people know the huge scope of this issue, the victimization and torture leveled upon the victims and how many of these places exist?

Yes he does. Why do you want to defend this POS?

Smerconish, you can’t be arguing that Kraft deserves a happier ending? I might agree if it was just prostitution, which prolly should be legal already, for sake of sex workers, but if those girls were trafficked slaves, Kraft prolly needs his last time out.

By defending Kraft, Smerconish is as much of a sleaze as Kraft is and he should apologize for it.