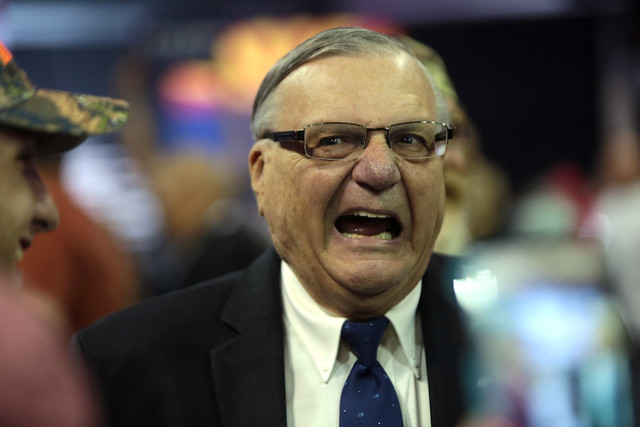 Controversial former Maricopa County, Arizona, sheriff Joe Arpaio says he wants his old job back, and announced Sunday that he has plans to run in 2020, issuing a statement that read:

“Watch out world! We are back! I will continue to stand and fight to do the right thing for Arizona and America, and will never surrender. Those who break the law will have to deal with this Sheriff.”

The 87-year-old Arpaio also posted his intentions on Twitter:

You may recall that Arpaio was convicted of criminal contempt in 2017 for violating a 2011 court order from a federal judge that said he couldn’t detain people simply because he was suspicious of their immigration status.

A month later, President Donald Trump pardoned Arpaio, saying that after “fifty years of admirable service to our Nation, he [was] a worthy candidate for a Presidential pardon.”

Arpaio’s time in office as sheriff was filled with controversy, HuffPost notes:

During his tenure as Maricopa County’s top law enforcement official between 1993 and 2016, Arpaio proclaimed himself “America’s toughest sheriff” and an immigration crusader. Critics pointed out his long history of scandal, including policies that racially profiled Latinos and mistreated prisoners. He also peddled xenophobic conspiracy theories questioning President Barack Obama’s birthplace.

The former sheriff also said Sunday that if voters return him to his old post, he plans to reinstate his “popular jail policies … and continue to enforce all Arizona laws that deal with drug trafficking, sex trafficking and other crimes associated with the border and illegal immigration.”

Additionally, Arpaio also pledged to reopen his controversial Tent City Jail, where inmates were housed in outside tents despite the sweltering Arizona heat. He also made inmates wear old-fashioned striped jumpsuits and pink underwear.

The outside jail was shut down by Arpaio’s successor, Democrat Paul Penzone, who called it a “circus” instead of a jail.