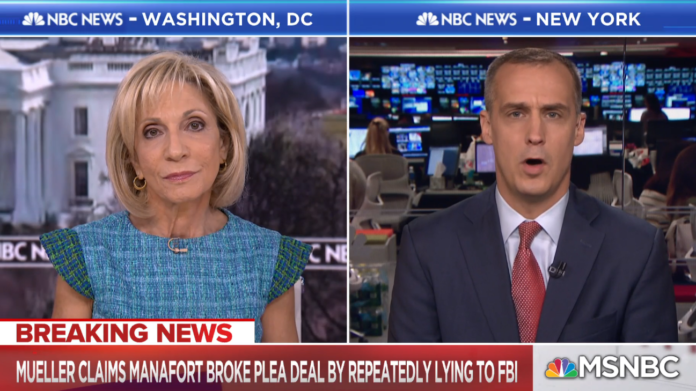 Monday evening we learned that former Trump campaign chairman Paul Manafort had violated the terms of the plea agreement he made with Special Counsel Robert Mueller by repeatedly lying to the special counsel. Manafort, who is 69 years old, could now be facing 14 years in federal prison.

I think Paul’s gonna be a guy who spends the rest of his life in jail.”

A serial liar? Sounds a lot like Donald Trump, doesn’t it? Is that why he hired a shady character like Manafort? Or did it have more to do with Manafort’s numerous connections to Russia? Either way, Trump brought him on board and now has to answer for why he did so.

Lewandowski was then asked by Mitchell if he thought Manafort should be pardoned by President Trump. He commented:

“I don’t think there’s any reason to pardon Paul Manafort.”

Perhaps, but what does the president think on that topic? Will he pardon Manafort now that he sees his friend is no longer a witness for Mueller? Some have suggested that if Trump does so, it would only speed up his impeachment and potentially prove to the special counsel that the president is trying to silence anyone who can testify against him.

Over the next few days, it should become clearer exactly what Trump has planned as Mueller continues to move closer to the president and his family. Mueller appears to have Trump in check, and an already irrational man like this president may act in a manner that surprises all of us.