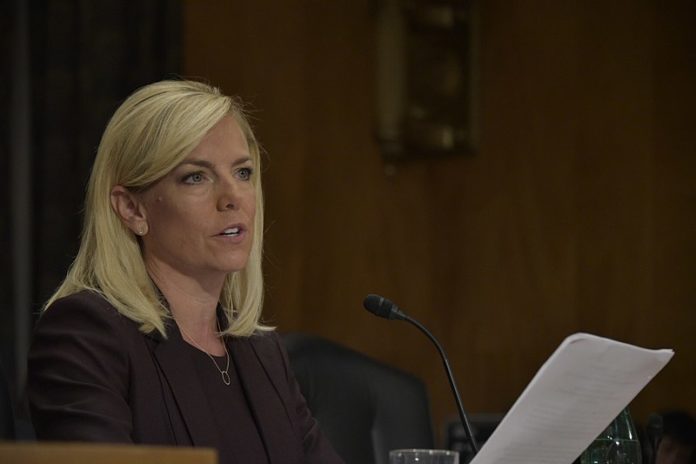 In response to a presentation Nielsen delivered to Congress on Friday about border security in which she included President Donald Trump’s border wall, Thompson immediately fired off a letter lambasting her for repeating Trump’s lies and misinformation to deceive Congress and the American people.

“Your border security presentation submitted to Congress today is yet another example of the misinformation and outright lies the Trump Administration has used to make the case for the President’s boondoggle border wall, defend the government shutdown, and distract the American people from a border policy so flawed that children have died in Department of Homeland Security custody,” he wrote before slamming the Department of Homeland Security of wasting taxpayers dollars. “Squandering American taxpayer money on a wall may satisfy a segment of the President’s political supporters, but it will not solve the real border security challenges facing our Nation.”

Indeed, Trump has repeatedly claimed that a wall will stop illegal immigration and illicit drugs. But studies show that most drugs cross the border through legal ports of entry and most illegal immigrants are those who overstay their visas after entering the country legally, often by plane or ship.

Basically, the wall is a giant ego project that won’t do a damn thing to stop illegal immigration or drugs as Trump claims. So, it’s no wonder why Thompson is demanding Nielsen testify and answer for the lies.

“As Chairman, I intend to ensure the Committee on Homeland Security fulfills its constitutional responsibility to conduct oversight of your department, including its implementation of President Trump’s border policy,” Thompson wrote. “In your year-long tenure, you have testified before the committee only once. Another appearance is overdue.”

This is what accountability looks like. In the whole time Republicans controlled this committee, they only had Nielsen testify once, even after two children died in Border Patrol custody. That’s disgraceful. But now she will finally have to answer for these deaths and the bullsh*t Trump has been forcing her to tell Congress over the last two years.