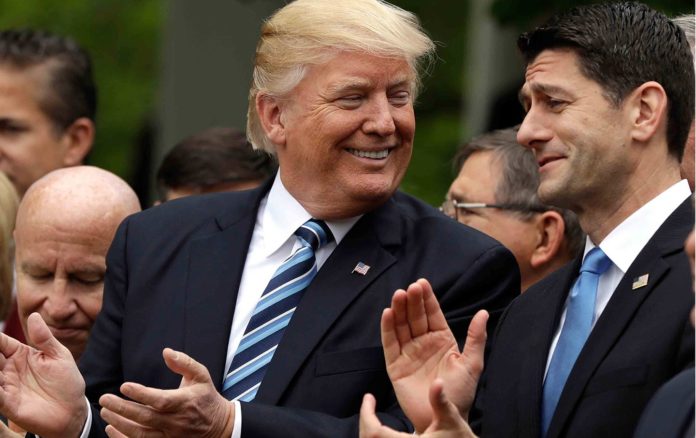 On Capitol Hill Thursday, what had once looked like a slam-dunk when it came to funding the government until February suddenly turned into a demand from President Donald Trump that House Speaker Paul Ryan refuse to bring a continuing resolution to the floor.

Minutes after Trump called Ryan away from a scheduled press conference to tell him not to bring the bill up for a vote, Senator Chris Van Hollen (D-MD) appeared on MSNBC and disgustedly told host Andrea Mitchell that Ryan was acting like a “minion” for the president and Fox host Sean Hannity:

“We had a big bipartisan vote here on the Senate to keep the government open, and stop-gap until February 8th, and now, Paul Ryan in the closing days as speaker has to do the right thing for the country, and for the House, and has to let democracy do its will and put this up for the vote. And the House should not be the minions for the president or Sean Hannity on Fox. They need to take the vote, and if the president is going to veto, because he is proud to shut down the government, that is his decision, but the house has to do their job and they should not be scampering down to the White House get instructions from the president.”

But instead of acting like an adult with a brain of his own, Ryan again gladly agreed to do Trump’s bidding, not scheduling a full vote by the House because he’d reportedly gotten an angry phone call from the president.

The reference to Sean Hannity is also apt, because right-wing talking heads have been ridiculing the notoriously thin-skinned Trump on the airwaves this week. Ann Coulter even declared that Trump had scammed his voters and wouldn’t manage to last through his term in office. Trump is an avid fan of such conservative media histrionics, and must have gotten his feelings hurt when his usual cheerleaders began to chastise him.

It would be nice to have an adult leading this country. Instead, we have a man-child with the intellect of a slow-witted squirrel and emotional maturity of spoiled two-year-old.

The good news is that adults are on the way, and will soon be in control of the very same House of Representatives that Paul Ryan cannot seem to lead.

The chaos in the House over the government funding bill is happening because Speaker Paul Ryan is acting like a minion for Trump and Sean Hannity, according to Sen. Chris Van Hollen (D-MD). https://t.co/TsxS7fH6fK pic.twitter.com/9VfBrEHFML