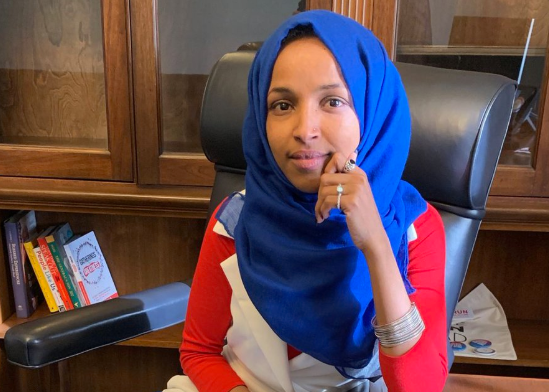 Republicans and Democrats are falling over themselves accusing Rep. Ilhan Omar (D-Minn.) of anti-Semitism just because she’s a critic of Israel and Israeli aggression towards Palestinians and has the guts to call it out.

Ever since Omar, the first Muslim woman elected to Congress, took office, Republicans have desperately tried to smear her as anti-Semitic for exercising her right to free speech, which includes criticizing the Israelis for their nearly genocidal stance against Palestinians and supporting a two-state solution that would halt Israeli aggression and put the Middle East on a path to true peace.

And now Democrats are betraying their own by joining Republicans in defense of the pro-Israel lobby after Omar spoke the truth on Twitter, first by pointing out that Republicans stand to lose millions of dollars in campaign donations if they don’t condemn every little criticism of Israel after House Minority Leader Kevin McCarthy (R-Calif.) called for punishing her.

It’s all about the Benjamins baby ? https://t.co/KatcXJnZLV

Republicans immediately cried foul, accusing Omar of posting an anti-Semitic trope involving Jews and money. the problem is her statement is true as she would go on to demonstrate by identifying AIPAC as the pro-Israel organization that lobbies Congress among many others.

Democratic leadership has apparently been bought by the pro-Israel lobby because they also condemned Omar and accused her of being anti-Semitic.

“We condemn these remarks and we call upon Congresswoman Omar to immediately apologize for these hurtful comments.”https://t.co/bxEUrVPndQ pic.twitter.com/7ONQIScOrF

Again, Omar’s remarks were NOT anti-Semitic. She merely pointed out a clear truth in our politics that Israel has a lot of sway, which is why the United States has failed to stop or has outright ignored Israel’s war crimes against Palestinians over the years.

Many of Omar’s supporters have come to her defense by reminding everyone of real anti-Semitic remarks by McCarthy that make him a hypocrite, and racist remarks made by Rep. Steve King (R-Iowa) that he only received a slap on the wrist as punishment for making.

While @GOPLeader directs islamophobic attacks at @RashidaTlaib & @IlhanMN in the name of “defending” Jews, never forget that he tweeted out antisemitic conspiracy theories about George Soros after Soros was targeted in an attempted bombing. #NotInOurNamehttps://t.co/nlnfFcy2PE

Equating @IlhanMN & @RashidaTlaib‘s criticism of Israel to Steve King’s long defense of white supremacy is obscene (McCarthy said it’s worse). In the US, we’re allowed to criticize our own government: certainly foreign governments. The GOP House Leader’s priorities are warped.

Another Twitter user noted that Omar has criticized Saudi Arabia’s influence on our government but that doesn’t make her Islamophobic.

She’s talking about the influence of Israel and this immediately gets twisted into antisemitism.

Is she also Islamophobic for attacking Saudi’s influence on American politics in exactly the same way?

accurately describing how the Israel lobby works is not anti-semitism https://t.co/30M6rVmeJb

So we’re just gonna pretend Sheldon Adelson doesn’t exist, and that Kevin McCarthy is trying to punish ⁦@IlhanMN⁩ out of sincere commitment to the wellbeing of us Jews? Cool, cool. https://t.co/oFa3R3Prw0

We call @IlhanMN & @RashidaTlaib “the first Muslim women elected to Congress” because the first Muslim was @keithellison. He was also viciously vilified as an anti-Semite – by the DNC’s largest billionaire donor. Perhaps there’s a pattern to be seen here? https://t.co/EW1ARYZVp4

Nevertheless, Omar agreed to apologize for any imaginary offense she may have caused, but refused to stand down from her main point.

The fact is that the pro-Israel lobby has its claws deep into both Democrats and Republicans, which is why the United States will continue to ignore the genocide being perpetrated against the Palestinians and why there will never be peace in the Middle East. Omar is clearly a threat to the establishment on this issue which is why both parties are trying to silence her. Not coincidentally, both parties have also endorsed legislation that would criminalize any criticism or boycotts of Israel.

It’s outrageous, and it’s clear that both parties intend to use Omar as a scapegoat in order to push this unconstitutional and anti-American bill into law. Just as the Russians are a danger to our democracy, Israel may be more dangerous because they have been entrenched in our government for decades pushing policies that entangle us more and more in a conflict that could be ended just by enacting a two-state solution that recognizes the right of Israelis and Palestinians to exist and have their own independent nations free of meddling from each other or outsiders such as the United States.

Israel already receives billions of dollars a year from American taxpayers for defense and the Israeli government has been obsessed with pushing our nation into war with Iran, which would be costly as America sacrifices blood and treasure while Israel watches from the sidelines.

Omar’s cause is just and she in no way said anything anti-Semitic. These are the imaginary accusations of lawmakers on both sides who want to appease and pander to a pro-Israel lobby that exerts far too much influence and has become a threat to our freedom and our national security. Democrats should be ashamed of themselves for buying into this farce manufactured by Republicans and the pro-Israel lobby in an effort to take down a congresswoman who actually cares about peace.