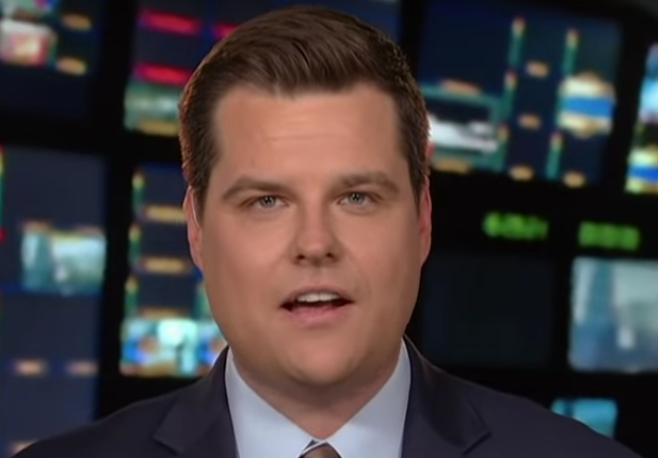 Gaetz has been one of Trump’s most reliable toadies, and during a House Judiciary Committee meeting to hear testimony from former FBI Director James Comey, the Florida Republican warned his colleagues that he doesn’t want to abide by an agreement House Republicans made with Comey to secure his agreement to answer their questions.

You see, Republicans attempted to subpoena Comey in yet another desperate dog and pony show so they could twist his words and selectively leak his testimony to fit their agenda.

Of course, this agreement apparently foiled Gaetz’s plans, which is why he objected to the rules during the hearing and claimed he didn’t have to abide by them.

“I wanted to state that I was not a party to any such agreement and don’t consider myself bound by it,” Gaetz said. “I also don’t know of any provision in the Constitution, the rules of the House, or any Federal law that would prohibit members of the committee from engaging in free speech, debate, and opining at any time.”

In other words, Gaetz is whining because he doesn’t get to misrepresent what Comey says in order to further his cause of helping Trump.

The topic of the testimony concerned Hillary Clinton’s emails, a tired topic that has been long settled, except in Trump mind and the minds of his supporters. Clearly, Gaetz wanted to gin up a scandal in order to excuse reopening a frivolous investigation despite the FBI already clearing Clinton twice in 2016.

Rep. Trey Gowdy (R-S.C.) stepped in to ask his Republican colleague to abide by the rules, but it was Rep. Jerry Nadler (D-N.Y.) who drew a line in the sand and warned Gaetz not to cross it:

“I find myself in rare but happy agreement with Mr. Gowdy,” he began. “I think representations were made to the witness. I think we ought to be bound by it. And I think that if Mr. Gaetz does not consider himself bound by it, he should perhaps be asked to leave at this point, as should anybody else who tells us upfront they will not feel bound by what this committee has represented to the witnesses.”

While seemingly just business as usual, Nadler may have been signaling to Republicans like Gaetz that there will be a new sheriff in town come January when Democrats take over the House. Nadler will become the chairman of the House Judiciary Committee, which means he can eject Republicans who don’t play ball.

Up to now, House Republican leaders have tolerated toady behavior from Trump supporting members, but Democrats most certainly will not, and that’s going to be a major blow to a guy like Gaetz who has spent months trying to cover for Trump in a bid for more power and name recognition. Now he will have to toe the line and play by Democratic rules or risk being ejected from the committee.

Democrats are making it clear that they intend for the House to act as a check on executive power and not a branch of henchman enabling Trump’s behavior and unconstitutional schemes.