The United States Blues
Home News Donald Trump Jr.: Border Wall Is Like A Fence At The Zoo... 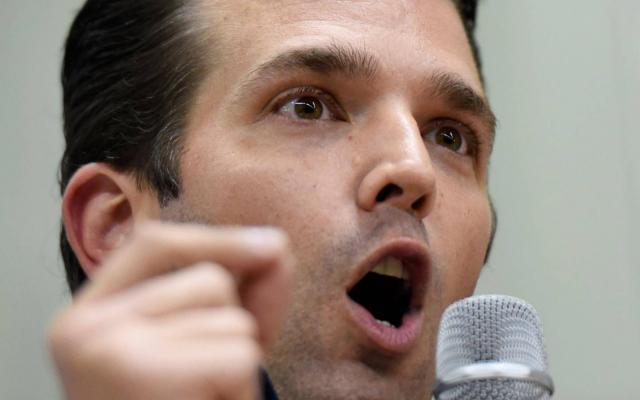 Much like his father, Donald Trump Jr. absolutely loves to post racist and offensive things on social media so the world can stand and gawk at his complete lack of a heart or brain.

“You know why you can enjoy a day at the zoo? Because walls work.”

Don’t forget this is the very same Donald Trump Jr. who once compared immigrants to a bowl of Skittles in which some of the candies were poisoned.

Clearly, the rotten apple didn’t fall far from the tree in the Trump family.

It didn’t take long for Don Jr. to get the well-deserved thrashing he deserved on social media:

Immigrants as caged animals, from the First Son pic.twitter.com/nsAJRASvnM

@DonaldJTrumpJr is going to get to know life behind bars very soon. pic.twitter.com/7aAlPeIOe7

The son of the President of the United States just compared immigrants seeking asylum to zoo animals.

I hope the First Son gets to find out just how efficient walls really are… pic.twitter.com/VD6I8Ihrvn

Just the first son equating poor brown people and children to animals. I wonder if this is gonna be received with the same outrage the “let’s impeach the mf” remark did.

Actually I can’t enjoy a day at the zoo right now. The National Zoo is currently closed due to the #TrumpShutdown

Not a single one of them has risen to meet the tremendous opportunity they were given as members of the First Family. Not one. Not for a moment.

I don’t know what it’s like living in a gilded tower. The view must be pious.

Later today, perhaps Don Jr. will enlighten us all with his thoughts on how slavery needs to make a comeback. Seems like the logical step after calling immigrants animals, doesn’t it?