The United States Blues
Home Economics Economists: Trump is stumbling America into a recession with his foolish multi-front... 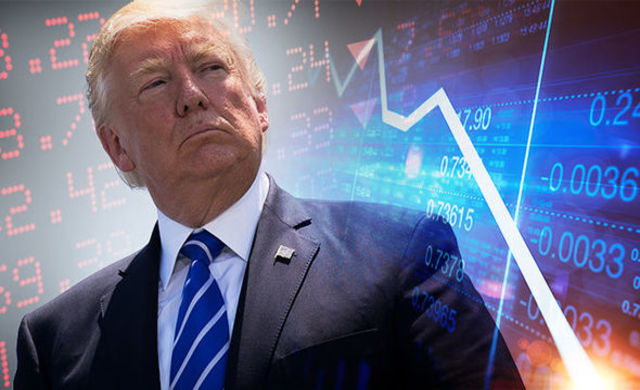 As President Donald Trump continues to escalate his trade war with China and threatens a new trade war with Mexico over immigration, economists now share a growing fear that a major recession is around the corner if he does not stop.

Farmers and other American businesses have been hit hard by tariffs on China, which retaliated against the United States with tariffs of their own and refusing to buy agricultural products such as soybeans from us in favor of goods from other nations such as Russia.

Thousands of jobs have already been lost because of Trump’s recklessness and American consumers are being forced to pay higher prices because companies are passing the cost of tariffs to them.

And just when you thought Trump could not be any more irresponsible, he picks a fight with Mexico by threatening tariffs over immigration, a move that has pushed farmers to their breaking point.

Soon, the entire country could be pushed to the breaking point, according to a new report by Politico.

Trump is edging to the brink of a two-front trade war in a very different environment than he enjoyed last year, when the GOP tax cut pumped billions of dollars of stimulus into the U.S. economy.

Analysts now expect economic growth to slow closer to a 2 percent pace this year. And investors, Wall Street analysts and the Federal Reserve are signaling that if Trump doesn’t make quick deals, growth could stall out completely.

In fact, the forecasting is unanimous.

Virtually every major economic forecasting firm now has growth downshifting to just below 2 percent in the second quarter of the year as the impact of the tax cut fades and a build up of inventories that boosted first-quarter GDP over 3 percent gets unwound.

And even the experts are warning that Trump needs to cease and desist before it’s too late and a recession occurs during his presidency.

The shock of tariffs as high as 25 percent on $350 billion in Mexican imports and over $500 billion in Chinese imports — coupled with negative reaction in markets — could push that number close to or below zero, analysts warn.

“If you combine the effects of Mexico and China tariffs, the drag on the economy is close to 1.5 percent and that is quite significant when you consider that growth is already slowing quite a lot,” Oxford Economics chief Gregory Daco said “And who knows about the confidence shock from tariffs or the stock-market shock. The risk here would clearly be recession if we are talking about these blanket tariffs.”

“We are already fragile on sentiment,” Grant Thornton chief economist Diane Swonk said. “We literally scared ourselves into a sharp market pullback last year in a stronger economy. Now we are doing all this in a weaker economy and it ups the risk that we fall straight through the ice.”

“It’s one thing to impose tariffs when the economy is on the way up and we are doing fine,” Daco adds. “But once you’ve reached the inflection point, and we’ve passed that point, then any push you give with tariffs is just going to make the slowdown more rampant and throw fuel on the fire.”

The last time this country witnessed a recession, it took several years to climb out of it, which we did thanks to former President Barack Obama and his economic policies that have contributed greatly to the stronger economy we have today, which Trump inherited.

That recession also started under a Republican administration that played fast and loose with tax cuts and deregulation. Now we have an even more irresponsible person at the helm and history is about to repeat itself with, perhaps, even worse consequences.